Franklin Barbecue in Austin, Texas is a modern success story and often ranked as the best barbecue in the world. Aaron Franklin started out in a food truck close to the University of Texas campus in 2009 and moved to the location on 900 E. 11th Street after one year, when the trailer was deemed totally incapable of meeting demand. After finding the location and renovating the place, the restaurant was opened in time for the South by Southwest festival in 2011. It has since then regularly been recognized as sensational barbecue, developed a cult following and the popularity have reached mainstream awareness. The location is around 30 minutes by foot from the Congress bridge, east of the Texas Capitol which is also located on the 11th Street. It’s not the most pretty walk but it’s good to move a little before the ensuing meat feast.

Aaron shares his barbecue experience and knowledge on YouTube and in books and this can be emulated at home, but it’s something special to actually be able to eat the reference from which all other barbecue is now compared. Eating at Franklin is not exclusive, but it takes commitment due to the waiting time in the line. The line starts forming early, around 06:00 AM with the doors opening 11:00 AM. Arriving at 10:00 AM means standing at the end of the parking lot and an eating time at around 1:30 PM. The best time to show up is probably around 09:00 AM. There will be some chairs to borrow and umbrellas in case of rain. 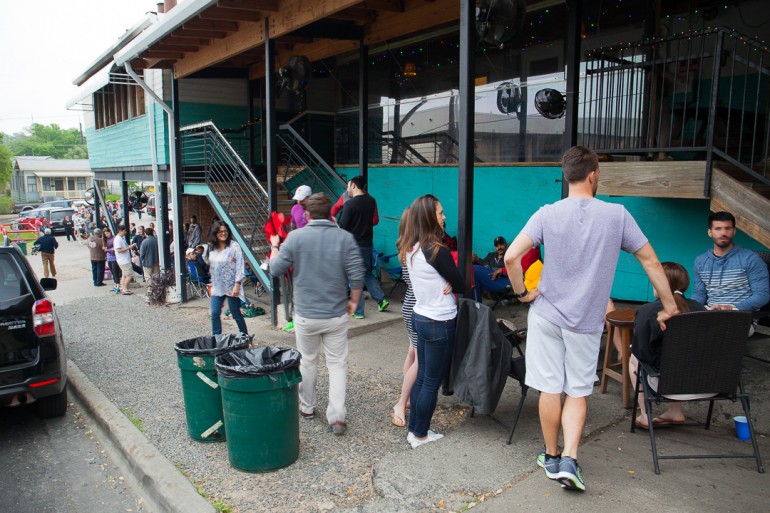 The restaurant is technically open for lunch, meaning it opens at 11:00 AM and sells food until it’s out. These hours (early lunch) is in the tradition of Central Texas barbecue where most places started out as meat markets. During our visit in March of 2016 there was a line manager helping out with questions about the restaurant and providing some guidance for those in the line. This person also gave some guidance on when it’s probable that you will get to eat and if there’s a chance for anything to be out by the time you get to the counter. The last person guaranteed to get something to eat also gets a big sign to carry, signaling that it’s probably not such a bright idea to stand in line for many hours behind this position in the queue.

What the waiting in line does is build excitement, at least if you’re prepared for it. If you’re inpatient, or have inpatient company, then it’s probably not the best place to be. All that time in line gives you plenty of time to think about what you’ll have. A setup similar to the traditional way of serving barbecue means that you first talk to the cutter, who gets you what want, and then you order sides, drinks and any dessert pies. Prices are very reasonable with brisket at $20/lb., pork ribs, pulled pork and turkey at $17/lb. and sausage at $12/lb. Meat is also available as a sandwich, where a brisket sandwich is $10 and the rest from $6 to $8.50. Tax is added to all prices. The Tipsy Texan has a bit of everything on it so it can be a good choice if they’re running low on the meat per pound as it will have it’s own supply.

Franklin Barbecue serves a lot of brisket, I heard them say that they make 200 lbs. every day. This is usually the last thing they run out of since they do so much of it. Turkey and pulled pork is usually the first things to go. After getting everything you find yourself a spot in the restaurant and sit down to eat. There’s no table reservations or anything like that, but you can pre-order meat and have as take away directly when they open. 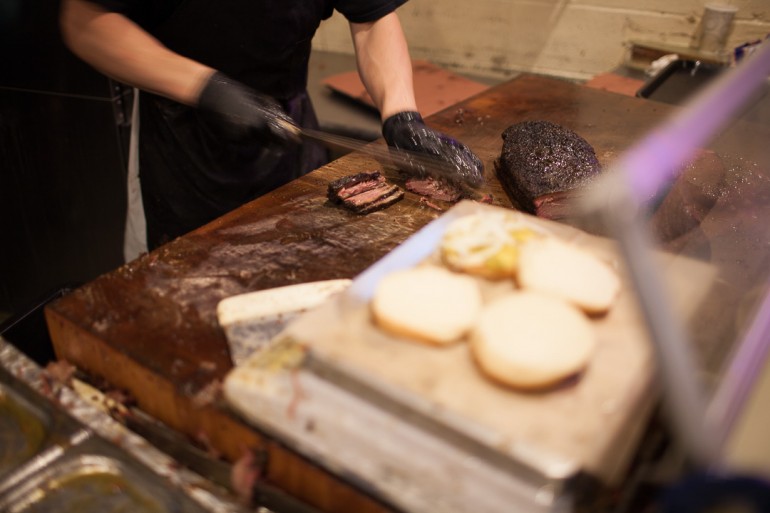 In the traditional way of Central Texas barbecue the sides really take a second hand to the meat. The meat markets were basically butcher shops who either smoked or ground up, to be used in sausages, the less popular cuts of meat and served this as take away. Some simple sides and bread was added to make the meal more complete for the agricultural workers, especially cotton workers during the late 1800’s and early 1900’s, who typically ate these meals. This is why the meat is served on butchers paper with only some basic plastic cutlery.

The brisket sandwich features both the fatty and lean end and comes with it’s little packet of pickles. The brisket is to die for, it really is as good as everyone says and a unique experience. The meat itself is of course so tender it can be pulled apart with almost no force at all, but it still has some bite to it. It’s hard to describe what’s so special about it, other than the complete opposite of dry. It’s juicy and the texture entirely uniform even though you see the traces if connective tissue and fat. There’s rendered fat everywhere, which makes everything quite greasy, but there’s more to it than that. 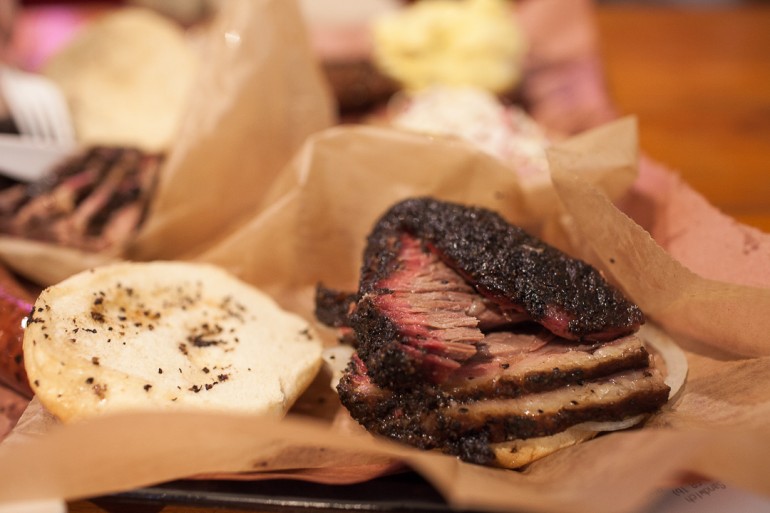 If you want to know why its called smoked meat, this is it. It’s not like the outside have been sprayed with a couple of oak smoke molecules, it’s an intense, integral part of the whole piece of meat, deeply penetrated into the meat. It’s mellow and soft, but a big step more than what you’d find in smoked products outside of wood fired barbecue joints. The heavy ting of black pepper and slight touch of vinegar provides a good counterbalance that together with the smoke balances the fattiness. On the sandwich, the pickles kicks this up one notch more and provides a most surprisingly well composed dish even though the setting would not indicate it. This is one of the best bites in my life.

The rest of the meats are almost as incredible, especially the pork ribs, and I wonder how anything can top this. But then I start eating it as an actual meal and not only as tasting samples, and while the sides provides a break from the meat they don’t really elevate it. 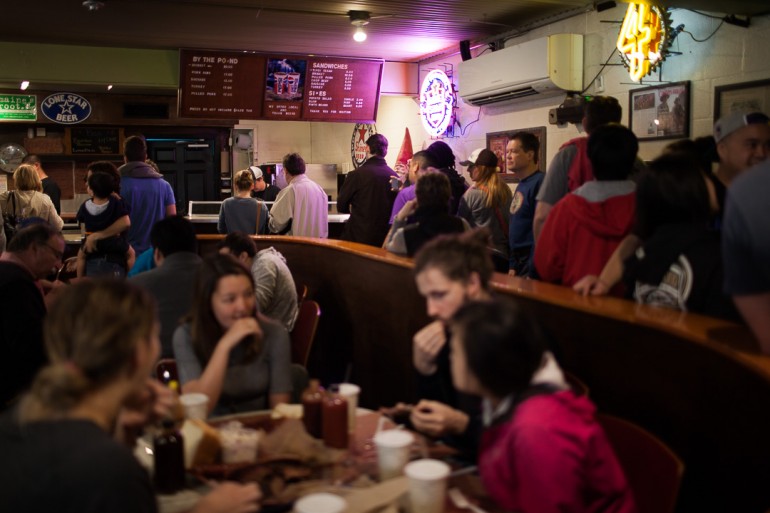 I understand the point of keeping to tradition, but the sides are really too simple and doesn’t really do anything to elevate the experience – aside from the pickles, that is, but they’re more of a condiment than a side. Given the very humble beginnings and goal of the experience Aaron Franklin wants to create this is entirely appropriate, but nevertheless a missed opportunity. It can still be genuine Central Texan barbecue even if things are kicked up a notch. Bachi Burger is a great example of how a type of food, hamburgers in this case, can evolve to the next level and still keep everything that’s great about it – and not have to go upscale to 20 course meals.

But here’s the thing, Franklin BBQ doesn’t have the history of the legendary Central Texan barbecue places around Austin, but this is as good as it gets and as genuine as it gets. It’s a history lesson at the same time as it bears the mark of the modern approach to learn and understand as much as possible and then use that as a basis for further experimentation. Aaron Franklin references Harold McGees book “On Food and Cooking” several times in his own book and shows that he uses the same kind of approach that Heston Blumenthal takes when it comes to perfecting food. Franklin BBQ is as good as it gets and a must for anyone visiting Austin, well worth the hours in line, maybe just not every day.