Doing what we do, constantly researching great places to visit that you know is going to be beyond the norm, you can think that the surprise and actual experience would suffer once we get there. Not so much, and we would argue that the opposite is true. Knowing more about a place makes it possible to dig deeper and appreciate what makes it great on multiple levels.

What we have decided to do is share the greatest experiences we’ve had, some small and some big, from 2016. Some were planned and held up to all expectations, but other were things that we more or less just happened by chance over the year.

1. US Highway 10 from Bryce Canyon to Monument Valley, USA 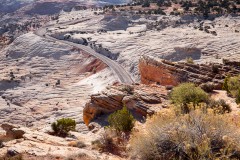 We sort of anticipated that the road trip from Las Vegas to New Orleans would feature some nice stretches of road, but the epic landscapes on US Highway 10 in Utah was more than we asked for and ever could have imagined. After passing national park after national park the view over the Valley of the Gods from the top of Moki Dugway let’s you grasp how small you are in the vastness of nature and how the scale of geographic timelines makes us humans seem indifferent in the grand scheme of things. The approach to Monument Valley from Mexican Hat is just a continuation of the same feeling and a suitable finish to an absolutely unforgettable drive. 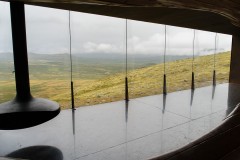 While driving through Norway we had planned on taking a summit hike up a hill, but due to bad weather we searched for other options in the area. A guide pamphlet suggested the “Snøhetta utsiktspunkt” hike, a 1.5 km walk where the path tells the history of the area and ends with a viewpoint over Snøhetta, the highest mountain in Norway outside of the Jotunheimen range. What we didn’t expect, since this was not part of our planning, was that an architectural masterpiece was placed here. We’d seen some images of the 75 square meter building online, but walking up to it and being alone in the carved wood, steel and glass box makes you want to build your own retreat in the area. The pavilion is designed by architectural firm Snøhetta who’s also designed the Oslo Opera House and the National September 11 Memorial Museum Pavilion, among other important and internationally recognized works. The firm, of course, has taken their name from this peak. 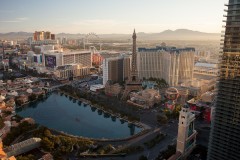 Going from Europe to the U.S. usually results in waking really early for a couple of days until the internal clock has adjusted. This year was no different and we’ve seen the sun rise light up the hotel room multiple times before, but this time we had a balcony on the 52nd floor overlooking the Bellagio fountains. The gentle nighttime March temperature was just enough to be comfortable in a bathrobe outside, and lounging in one of the chairs, seeing the sky change color from dark blue to pink and then yellow while seeing the town wake up resulted in a very strong memory. 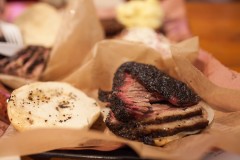 There are certain experiences you remember as the origin, when there’s a distinct before and after that makes you realize your frame of reference has forever been changed. Eating texan barbecue at Franklin Barbecue is such an event. We’ll never look at barbecue the same way again. 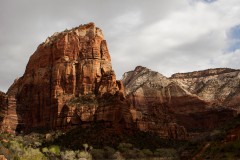 Zion National Park is almost mystical, how could this place exist? It’s so different from the vast, flat expanses that at least we usually associate the southwest with. As you approach the park there’s gradual changes in the landscape that builds something up, but nothing can prepare you for actually seeing the valley for the first time. Angels Landing is the crown of this creation, majestically towering above the valley floor. Reaching the summit is the ultimate payoff for a steep and airy but very rewarding hike. 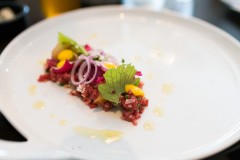 We’ve wished that there was a “Maaemo bistro” in Oslo, but finally managed to find such a restaurant in Trondheim on the west coast of Norway. The menu at Folk og Fe is as short and focused as the dining room is small, but what they lack in size they compensate in heart. The cuisine is based around contemporary interpretations of classic Norwegian cuisine and is a must stop for anyone visiting the region. 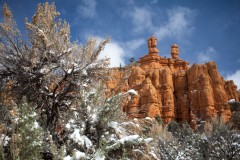 Going from Zion National Park to Bryce Canyon you pass the Dixie Forest’s Red Canyon, a picture perfect red rock area. When we passed it we were going through a snowstorm and figured it would be a good idea to get to our destination as soon as possible, but in the back of our heads we knew that there were more to see. So, the next day we started our day with a quick visit to a cold but very pretty, partially snow covered Bryce Canyon before driving 15 minutes back the way we came from to Red Canyon. In the Nordics, snow either covers the landscape or becomes a grey, soggy mess. Here it was just lightly sprinkled over the rocks and vegetation, providing fluffy white accents to the saturated green and red scenery. Even on the ground there were dry, red paths in the white snow. A sight that almost seemed out of this world and impossible with our paradigms. 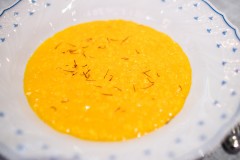 Bellagio by Lake Como, the inspiration for the casino resort in Las Vegas, is a picture perfect fantasy of the type that could only result from it actually being a rich mans hot spot for centuries. It’s strange that it’s just as much a tourist attraction as Bellagio, Las Vegas is, with roughly the same clientele and not much more “genuine” life, although it’s as upscale and picturesque as you could only imagine. The risotto made with saffron, Risotto Milanese, is a classic regional dish, and there are many places where you can get a well made risotto served. But taking the steps up to Restaurant Barchetta in Bellagio and smelling the the Risotto Milanese as it’s served transports you into another world, tourists on the other tables or not – it’s a multi-sensory overload. 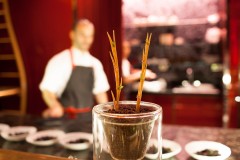 There are some flaws with É by José Andres, mainly that it doesn’t really excite to the same extent as the mysterious and cumbersome booking process invites to and that seeing the chefs struggle humanizes them instead of lifting them, but it’s an unforgettable experience the same. One part of this equation is that you get to experience É together with the other equally food interested guests and it becomes a shared experience for like minded people.

10. Cocktails at The Thief, Oslo, Norway 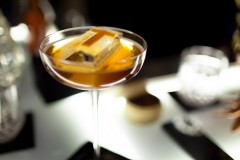 The Thief is a glimpse into what Oslo, and Norway, can be when they let loose. The hotel is the place to stay for the discerning international visitors in Oslo which means that there’s a genuine mix of interesting personalities in the bar and it works like it usually only does in the movies. It also has an ambitious cocktail program with top level service meaning that you can easily spend hours and emerge way to drunk for your next appointment.

Gelato in Bergamo, Italy. Driving through northern Italy can be somewhat of a disappointment, especially if you’ve previously driven through the green hills of Tuscany. However, in the outskirts of Bergamo there’s a hyper modern gelateria, Bedussi, with truly fantastic ice cream, definitely living up to the same standard as the award winning Gelateria di Piazza in San Gimignano.

Sunrise morning workout in the Swedish archipelago, Stockholm, Sweden. Summers in Sweden are known for being short and rather cold, but during one (rare) warm and still summer morning, with music pounding in my ears, a terrace overlooking the Baltic sea was the perfect spot for an epic workout and stretch session.