Aria Resort & Casino is the centerpiece in Las Vegas’ CityCenter complex that opened in December of 2009. The Aria, and CityCenter, is a major driver in pushing Las Vegas to the next level, it’s an original concept that’s both contemporary and luxurious at the same time, not the pastiches we’re used to see in the city. Make no mistake though, it’s still a traditional Las Vegas mega casino resort with all of the potential opportunities and downsides that comes with it.

It’s located right in the middle of the Strip just south of Bellagio and the Cosmopolitan within easy walking distance from Monte Carlo, Caesars Palace, Paris and Planet Hollywood. The easiest way to get to Aria from the airport is by taxi but it’s also possible to use a shuttle or go by car. They have a free self-parking garage and valet service. There’s a tram, the Aria Express, with stops at Bellagio, Crystals, Aria and Monte Carlo, but the stops are tucked away so it’s often quicker to walk than to use the tram. Due to being a newer development there’s not always a line of taxis, but they’re not far away and usually there’s almost no wait. 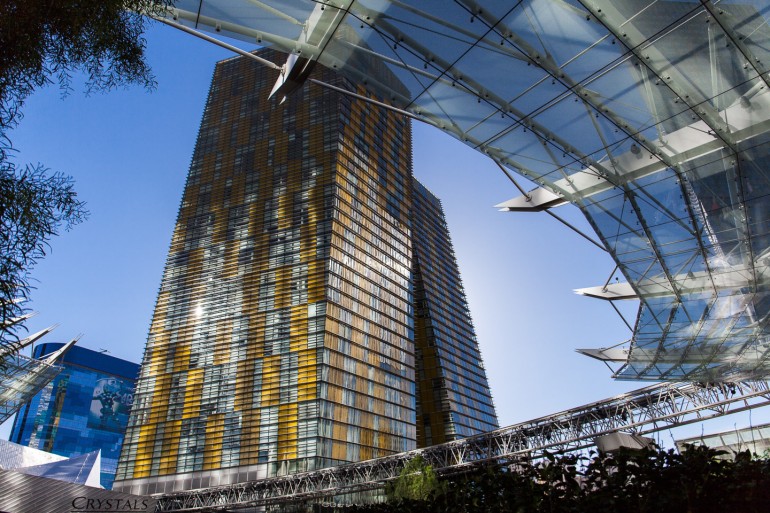 The Veer towers seen from below the Aria canopy.

CityCenter is a major addition to Las Vegas by the MGM Group. Except for Aria the other main developments are the Crystals shopping mall, the Mandarin Oriental and Vdara hotels and the residential development Veer Towers. There was also another building that’s now being demolished due to a faulty construction (the Harmon Hotel). Each property brings their individual flavor but all are ultra-modern urban in style which might have something to do with why they call it “CityCenter”.

Pelli Clarke Pelli Architects was handpicked to design the Aria after their track record of delivering massive development projects. The hotel has 4004 rooms with a 14,000 m2 casino, making it the 11th largest in the world in terms of number of rooms, but it’s the highest one out of these at 61 floors (180 m). The hotel uses a number of technologies and new solutions to reduce the ecologic footprint and minimize the use of energy. New ways of routing the air condition minimize energy use and the outside water installation greatly reduce the amount of water vaporized when compared to conventional fountains, for example. 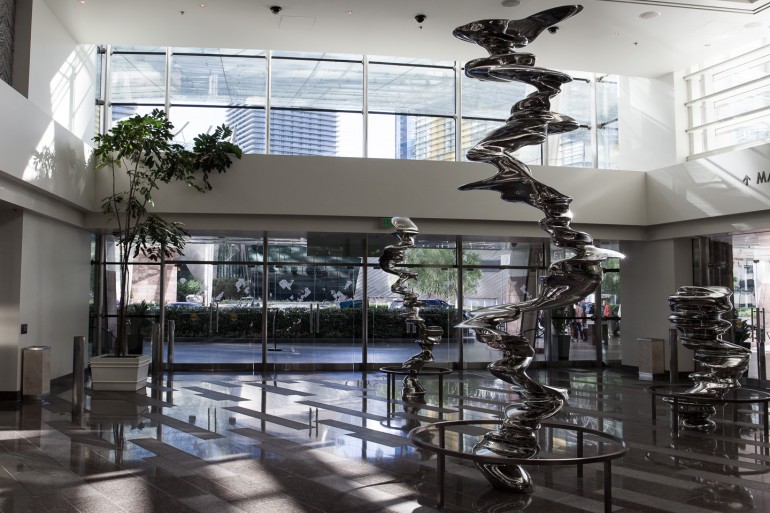 Bolt, Bent of Mind and an untitled piece by Tony Cragg.

There’s a number of contemporary art installations carefully integrated into the overall design. There are both bespoke creations as well as existing pieces from the 20th & 21st century. One of the highlights is Henry Moore’s Reclining Connected Forms between Aria and Crystals. Bolt, Bent of Mind and an another untitled stainless steel piece by Tony Cragg in the self-park and tram lobby. Hard to miss is Big Edge, the colorful collection of canoes by Nancy Rubin outside the north entrance.

This mindset of blending decoration, art and both interior and exterior spaces goes through the entire development. Every single surface is carefully designed and finished, beautiful examples are the walls behind the Sports Bar and Elevator Bar and the corridors to the guest rooms. There’s hardly a single parallel surface and even rarely used spaces are grand and receive the same attention to detail as the main pathways. Due to a semi-circular layout the casino floor doesn’t feel like a big football field, but it’s almost a little too dark and feels quite heavy as a result. It’s in stark contrast to the immense scale and lighter stone finishing of the north entrance which is my personal favorite location inside the Aria. The little yard between Aria and Crystals and the space outside the south entrance are some of the most spectacular outside locations that I know of. That they’re highly used spaces makes them even more impressive. 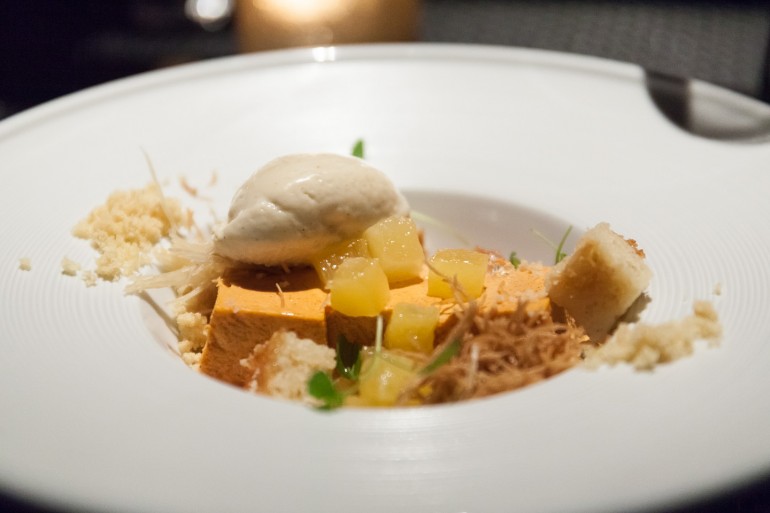 Aria and CityCenter clearly caters towards guests with an above average income. The hotel itself isn’t more expensive than the other nicer hotels on the Strip but most of the restaurants on the premises and the shopping in Crystals is very high-end in nature. When it comes to food the highlights are Sage and Jean-Philippe Patisserie, both very good in their own right and also very reasonably priced for what you get. Sage serves American cuisine with global influences and is among the very best restaurants that I know, it’s also by quite some margin the best place to get a cocktail at Aria. Jean-Philippe is a life saver and very conveniently positioned next to the guest elevators. They’re fantastic both for quick breakfast (try the Vanilla Parfait) and for the sweet pastries that they’re more known for. The Sugared Brioche is a true display of baking skills in its simplicity. Unfortunately there’s no place to get proper coffee inside Aria, you have to go Sambalatte on the Strip-entrance of the Monte Carlo to get that.

FIVE50 makes nice pizzas and are a perfect stop on the way home from a night out, Jean-Philippe is also open late on weekends. The rest of the restaurants are not bad but there are better choices close by. 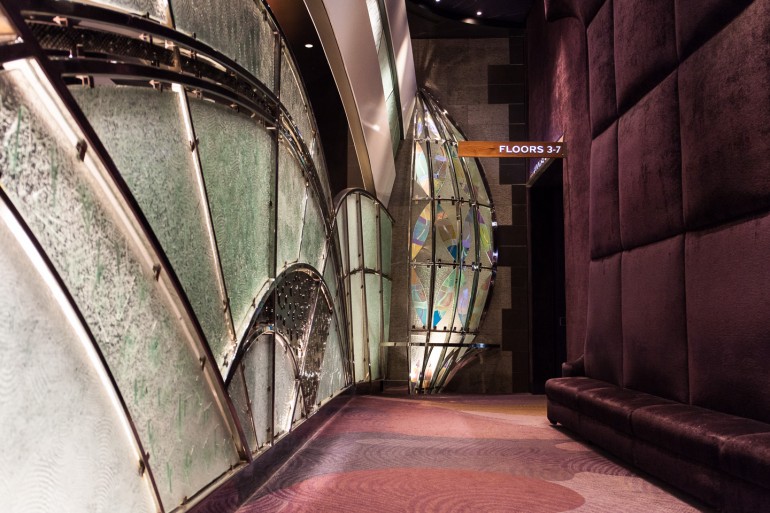 Path to elevators behind Jean-Philippe Patisserie.

Out on the casino floor the poker room is one of the very best for low to mid stakes on the Strip. It has lots of cash games from $1/3 and up and daily tournaments. For high stakes games Bellagio is still the king.

Inside Aria is the watch and jewelry store Radiance that has a good selection of independent brands. They regularly stock special pieces not often seen, on this visit they had a Parmigiani Fleurier Bugatti Type 370, a blue Maîtres du Temps Chapter Three Reveal and an Ulysse Nardin Blue Freak Phantom, among other pieces. The staff is both friendly and genuinely interested in watches. However, Crystals is just next doors and provides some of the best luxury shopping available anywhere.

What About the Pool?

Aria is not somewhere you go for its pool area like some of the other resorts. It’s located on the second floor and is big enough to ensure that capacity is never a problem, but it only features shallow pools that’s made for cooling off. There’s almost no shade on the general use day-beds which is probably quite efficient from a throughput perspective but it doesn’t make it inviting to really spend time by the pool. They have no big pool party, instead Liquid Pool Lounge is a restricted and secluded adults only area where the atmosphere heats up from time to time.

The scale and number of rooms at the hotel makes itself apparent when checking in and dealing with the counter and concierge. Although we ordered the stay months in advance the actual booking had to be split up due to expense reasons. We still wanted one room for the entire stay and this was clearly marked and communicated when ordering. When checking in the counter stafff seemed surprised by this request and had trouble finding a room where we could stay for the entire week. We eventually got a room on the third floor which is kind of a bummer when it’s one of the highest buildings around (the airspace for McCarran airport restricts the height of buildings at the south end of the Strip and Aria has maxed it out).

We also had to ask the staff ourselves of where and how to get our value-packages that was part of the booking. Turns out that one was given out by the concierge which was closed at arrival. We didn’t really put the concierge to the test but they were not as friendly and attentive as the ones at Vdara, THEhotel or the Hard Rock Hotel. 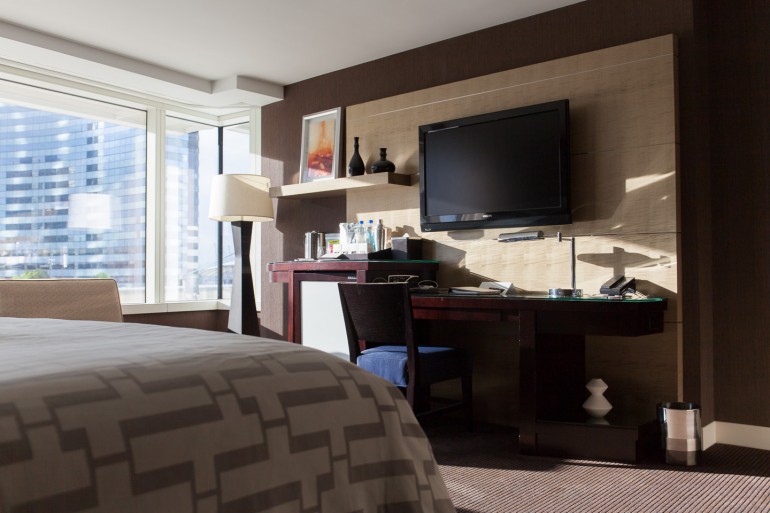 The deluxe standard room at Aria.

The deluxe standard rooms ($119-299 per night depending on day of the week) are definately upscale and modern with their cream, dark browns and blue colors, but they don’t project that definite luxurious feeling that could be expected based from the design and finishing of the rest of the resort. The standard rooms are proportionally sized and quite masculine but not quite as inviting as the ones at Vdara, for example. The lighting, temperature and curtains are controlled through a number of control panels or the TV, but they don’t always work quite as expected. The shading curtains didn’t open fully and the TV was very laggy, a final criticism is that there’s no way of really cranking up the light so it gets quite dark at night. Just like the pool it seems as if the rooms are not made to be lounging in but are quite heavily focused on one purpose.

We’ve previously seen individual restaurants and clubs that are conceptual, modern and luxurious in Las Vegas, but not an entire resort pushing the boundaries the way Aria and CityCenter does. In some ways I don’t really understand the positioning of Aria, I get the feeling that it’s catered towards guests that want to be high-earners rather than those who really are. This cripples the experience and makes it somewhat disjointed (especially considering the restaurants and shopping on offer), but it’s nevertheless a great addition to Las Vegas. 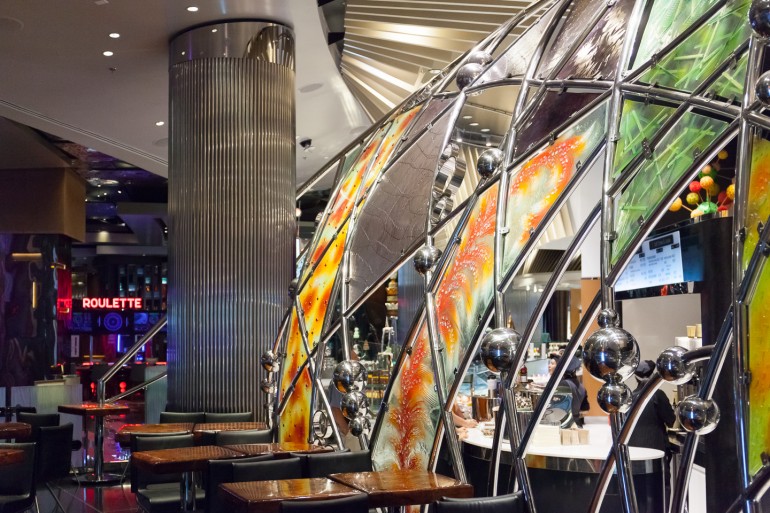 Aria is ideally located at CityCenter right in the middle of the Strip. You pay a very reasonable amount for what you get at Aria and compared with any other place in the world the value is through the roof. But for the same kind of money you do get a more personal service and more upscale experience of CityCenter by staying at Vdara. The Cosmopolitan puts you in the same area and within crawling distance of food that’s better value and more exciting. Also in the same price range is THEhotel with very nice two room suites and access to Mandalay Bays great pool area. And for the best possible CityCenter experience, although a bit more expensive, the Mandarin Oriental is the ultimate choice.

Aria should definitely be on any shortlist for a stay in Las Vegas, but it’s not quite the obvious choice I hoped it would be.

Please support us by booking your stay at Aria Resort & Casino through Booking.com