We recently got a chance to spend some time with the Master Compressor Extreme LAB 2 Tribute to Geophysique in Jaeger-LeCoultre’s boutique at the Wynn in Las Vegas. What we found was a very impressive watch in the high-end luxury sports category. It’s a timepiece made for individuals who want to be able to use it while living an active lifestyle and also an experimental test bed for the company. Unfortunately we didn’t take any of our own photos so the press images will have to do.

There are two versions of the Extreme LAB 2, one made with a gold outer chassis and the one labled “Tribute to Geophysique” with a case made from a titanium-vanadium alloy. It’s created as a working tool for the modern geographic explorer, taking inspiration from the JLC Chronomètre Geophysique introduced in 1958, but it’s very far from other so called tool watches. Where it ties back to the explorers of old times is that you certainly have to be a gentleman of means to buy it.

It’s designed to withstand shock, the elements of mother nature and magnetic fields so that it can accompany its wearer jumping out of airplanes, go below the surface of the sea and everything in between. The gold version is heavier, easier to scratch up and lacks the amagnetic properties of the Tribute to Geophysique, but I can see the appeal as a mix of the two worlds of fine, traditional horology and the contemporary interpretation and usability. It’s also a bit like the luxury explorer yachts  in that you take a tool and add luxury, but for me a scratch built object with luxury built in and not added by more expensive but worse performing furnishings always wins. There were 300 watches made in titanium and 200 made in gold.

During the launch in 2010 Jaeger-LeCoultre really did everything they could to imprint the message that it’ll really stand up to considerable abuse and that it’s not just marketing check-boxes on the case design. However, for some reason it’s mostly unknown of and partly misunderstood. 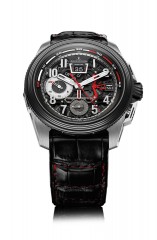 As a technological test bed it’s much in line with the Bugatti Veyron, Volkswagen Phaeton or the Audemars Piguet Concept watch where a number of solutions will eventually trickle down to more mainstream models. Among other innovations is the radial power reserve that can now be seen on the AMVOX7, for example. It really is a very rare chance to get your hands on a range of emerging solutions and materials that all work together towards the overall concept.

One of the main features is a bespoke movement featuring a chronograph with a digital instant jumping display for the minutes combined to date, a second time zone, a seconds stop feature, the radial power reserve and a function selector for the crown. Not impressed yet? The movement is designed to be durable and run with minimal lubrication, it’s also engineered around built-in shock resistance and material choices that makes it amagnetic. This means that it can potentially work for a very long time before needing any service. The perfect doomsday watch if you will.

For a user the Extreme LAB 2 falls into the same category as Richard Milles’ sports chronographs like the RM011 Felipe Massa. They are both meant to be used hard while being made to fine watchmaking principles both honoring the horological legacy and pushing it at the same time. Other common features is the modern, technical finish and architecture of the movements and the open multi layered dials. They are one clear step above most other luxury sports watches.

Where it clearly beats the entry-level Richard Mille watches is in the movement. The RM011 uses a chronograph module made by Dubois Dépraz on a Vaucher base movement shared with the RM005. The Extreme LAB 2 has a bespoke, integrated chronograph movement exploring new technologies that was designed and produced in-house for this particular watch. There’s a big difference in having everything designed, engineered and produced for the specific timepiece. It shows a commitment to making this particular watch as good as it can possibly be, something that can’t be said when components are shared between different designs.

The Extreme LAB 2 is actually closer in concept to the cost no object Richard Milles like the first Nadal watch, the RM027, where RM explored ways of making a tourbillon movement as light as possible while at the same time durable enough to withstand the shocks of playing tennis. The difference is that with the RM027 the customer payed very dearly to get their hands on that technology (which also didn’t always work according to specification). With the LAB 2 the R&D cost has been heavily discounted and is instead spread on the future watches that benefits from it. The sheer complexity and number of unique features made in a production run this limited and at the price it’s sold for is simply unheard of.

The Tribute to Geophysique is powered by Calibre 781 that’s made up of 566 individual parts and is made specifically for the Extreme LAB 2. The movement fills the case and has a design that suits the rest of the watch very well. It has a three-dimensional architecture and an incredible depth when viewed from the back. The rotor and various other components are PVD coated providing nice contrasts to the titanium and brass. All surfaces are highly finished with a combination of circular and straight graining, polishing and some kind of blasting. Not seen in the movement photo is that many (but not all) of the bridges are beveled. It’s technical in style and very different from the classic design and ornamentation of A. Lange Söhnes chronographs, but equally appealing. Minor gripes in that comparison is the rotor that hides much of the movement.

From the movement up the watch was designed to be sturdy and durable, it has the autotractor features like a balance bridge fastened by two screws, for example. In addition the free-sprung silicon escapement and ceramic ball bearings for the rotor doesn’t need lubrication, but the movement isn’t completely free of lubrication like the first Extreme LAB watch from 2007.

Instead of shielding the movement it’s been made resistant to magnetic fields through the use of amagnetic materials in critical components, like the escapement and hands.  The chronograph is integrated with a vertical clutch and a column wheel mechanism. The power reserve is 60 hours through a single barrel. The main difference between the Geophysique and the gold version is that the gold one has a slightly different movement, Calibre 780, with 569 components that lack the silicon escapement and amagnetic properties of the titanium version.

A movement container holds the actual movement (made from TiVan 15 alloy) and a sandwiched carrier-chassis of either titanium alloy or gold encloses it. It has a ceramic bezel and crown with sapphire in the front and back. In total, the case is made up of 143 components that are brushed, polished and beveled to create a spectacular end result. It’s rated to 10 bars of pressure.

Getting Lost in the Dial 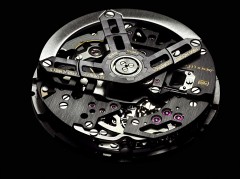 Calibre 780 for the Extreme LAB 2 in gold, photo by Jaeger-LeCoultre

The dial is open worked and multi-layered with many of the components that make up the various displays visible providing a glimpse into the machinery that powers it. There’s a lot going on and it’s quite busy on close inspection due to all of the components but the hands and indicators are bold enough to make it legible and clear. It’s a beautiful example of honest design adding as little as possible and making every functional component a piece of the overall artwork.

At 12 o’clock the digital chronograph minute display can be found, right below it is the more conventional hour indicator that uses a not so conventional 24 hour scale. The date window is at 3 o’clock with it’s date discs clearly visible around the perimeter of the watch. Inside the date window is the function select indicator.

Instead of pulling the crown, a button inside the crown is pushed to select N (neutral) where the crown is disconnected from the gear train and only winds the barrel, GMT for adjustment of the GMT time and date or SET for time adjustment. At 9 o’clock is the second time zone with its own hour and minute hand. Around the perimeter of the upper half of the dial is the radial power reserve meter.

The seconds hand doesn’t stop when setting the watch through the function selector, but it can be stopped by using a slider on the left of the case. While many believe that a power reserve indicator is unnecessary on an automatic watch, I find it appropriate in this context since the LAB 2 is designed as an usable instrument. For you to be able to trust the time you have to know the state of the main barrel and if the power reserve has been used up for some reason.

At 46.8 mm in diameter and 16.5 mm in height it’s a substantial watch but due to a light overall weight at 137 grams and a curved back and lugs it’s wearable even on smaller wrists, just like JLC’s Navy Seals GMT and AMVOX2 watches. The clasp also has micro-adjustment to really nail the fit. It comes with two straps and has a quick change system, the crocodile strap doesn’t quite work with the titanium version for me (it works very well on the gold one though) but I don’t know if the rubber strap is much better, their only place is on pure tool diver watches in my opinion. A textured calf or canvas strap would’ve been a much better match, like the ones from the AMVOX2 range or similar to the canvas straps of Linde Werdelins Spidolights.

I really like the underlying concept and the execution of it, but the way in which Jaeger-LeCoultre has produced it as an experimental platform makes it a very special watch for those who buy it. At this price ($55,500 from authorized dealers), the level of technology, finishing and exclusivity is simply unheard of.

Jaeger-LeCoultre has never been as good at marketing as the other major manufacturers, I guess that instead of buying the rights to big events they have kept their prices down. The result is that the Extreme LAB 2 is one of the best hidden secrets in the world of watches. They can still be found in retail and even discounted online, but the question is for how long.

For more photos of the Jaeger-LeCoultre Master Compressor Extreme LAB 2 Tribute to Geophysique, please see the review from The Watch Enthusiast.