Most of the really good restaurants in Las Vegas can be found in the big resort hotels along the Strip, with some serious investment in “beacon” restaurants with famous chef’s designed to lure in visitors. But some incredible ones are elsewhere. Both Bachi Burger and Raku are off-strip, for example, and well worth the effort of seeking out. Cosmopolitan has established itself as the “it”-place  with an incredibly diverse and well-rounded restaurant game while City Center and Wynn are pushing hard for the deep-pocketed gourmet clientele.

The last time the Michelin released a Guide for Las Vegas was in 2008. This means that any restaurant boasting stars are not exactly lying, but they are not really giving up to date information either. In the rest of the world the release of new Guides are a very highly anticipated event that can make or break restaurants but in Vegas it’s as if the time stands still when it comes to the Michelin Guide. Some restaurants have stars they shouldn’t have and other newer restaurants haven’t had a chance at getting their stars. The takeaway is that the Michelin stars currently don’t say much at all, but this doesn’t mean that Las Vegas isn’t one of the world’s premier foodie destinations. 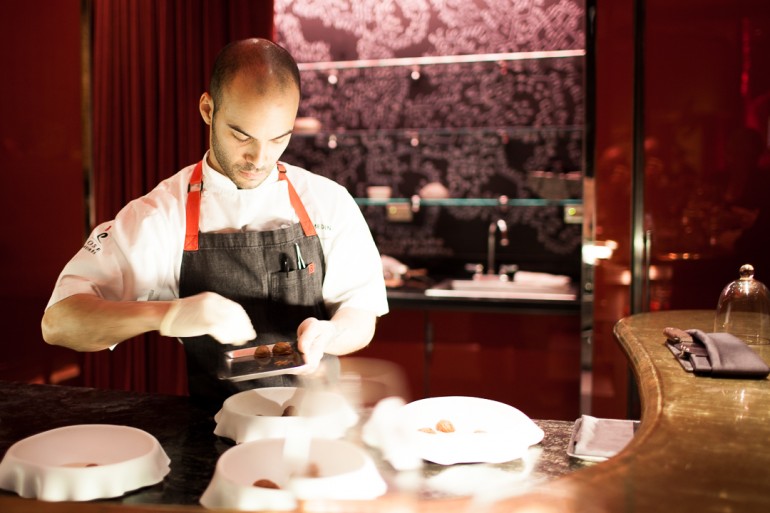 For a truly gastronomic experience, there’s no shortage of options. Many of the world’s greatest chef’s have set up big operations which fly in fresh produce and protein daily to offer the best of what they can do. The prices reflect this, and sometimes you loose something when scaling up in the way necessary for this setting. But other times the result is magical and you get something that could only happen in Vegas. 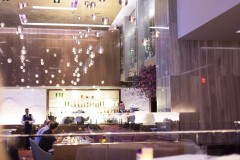 Pierre Gagnaire describes Twist as something between fine dining and a bistro and also a twist of Las Vegas mentality and his own philosophy. Food made to be enjoyed and where cooking has an element of artistry and craftsmanship to it. Nothing is to be taken too seriously, it’s not even a gastronomic restaurant from his own account. Make no mistake though, this is Pierre Gagnaire at his best and the dishes will challenge you and make you think about food in a new way. Review of Twist by Pierre Gagnaire. Mandarin Oriental. http://www.mandarinoriental.com/lasvegas/fine-dining/twist-by-pierre-gagnaire/ 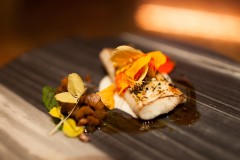 É is a foodies dream; an 8 person restaurant within Jaleo at the Cosmopolitan where all guests seated by a counter and served the same 20-odd course tasting menu. The final preperation and assembly of the dishes are done by the chefs out in the dining room which is styled to resemble the inside of José Andres head. This is a sensational, and exclusive, gastronomic experience based on Spanish cuisine with lots of modern techniques and ideas. Review of É by José Andres. Reservations required by email which open 3 months in advance. Tasting menu $195, wine packages from $120. Wed-Sun 5:30 p.m. and 8:30 p.m.The Costmopolitan, http://www.ebyjoseandres.com/ 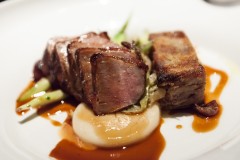 Chef Shawn McClain deconstructs classic dishes and combinations, perfects every component and then presents his owb versions that are easy to enjoy and love but display incredible technique and understanding of the ingredients. The foie gras custard brûlée put McLain on the culinary map but the cocktails and absinthe preparations are also of the very highest level. Exceptional value. Review of Sage. The Aria. http://www.aria.com/dining/restaurants/sage 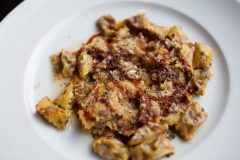 For really high class Italian food, especially pasta, Scarpetta is the place to go. The staff try to pull off a level of service one step above what’s natural for them which feels a little contrived, but the interior design is really nice and the attention to detail when it comes to the food is remarkable. Small but very good selection of wine available by the glass. Choose wisely on the menu and Scarpetta can be a value restaurant. Mains $24-65. Mon-Sun 6-11 p.m. The Cosmopolitan. https://www.cosmopolitanlasvegas.com/restaurants/scarpetta

There’s not just an abundance of high-end restaurants in Vegas, there’s also a wide range of foodie-approved less expensive choices. While there are sister restaurants to many of the global hit restaurants such as Momofuku it’s the original ones that really got the x-factor. 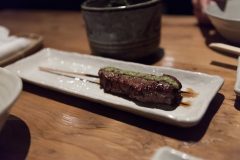 Japanese cuisine made to absolute perfection by chefs that show insane skill in their preparations. A very small (and cold, bring a coat) dining room  is packed every night. Their agedashi tofu is perhaps the best in the world. It’s the local chef’s choice and is becoming a true phenomenon. Reservations required. 5030 W Spring Mountain Rd. http://www.raku-grill.com/ 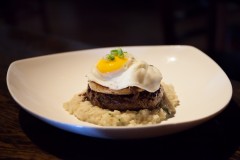 Vietnamese fusion burgers bringing something genuine and new to a town of burgers. Ranked 19th of the 20 most important restaurants in Las Vegas by the Las Vegas Weekly. Multiple locations: Henderson at 470 E. Windmill Lane and Summerlin at 9410 W. Sahara Avenue. http://www.bachiburger.com/ 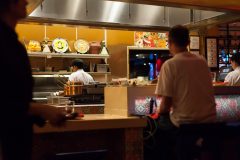 China Poblano has become one of the places we just go to when we’re in Las Vegas. The flavours from the Mexican-Chinese fusion food is bold and you eat much of the food with your hands, but the level of craftsmanship is still high. China Poblano makes it easy to get great, cheap food, and that’s sometimes incredibly convenient when away from home. Mains $5-18. Mon-Sun 11:30 a.m. – 11:30 a.m. The Cosmopolitan. http://www.cosmopolitanlasvegas.com/taste/restaurant-collection/china-poblano.aspx

After Society Café closed The Henry located by the north Strip entrance at the Cosmopolitan is the best place to go for a power brunch. They serve a range of really well executed variations on American breakfast staples. Try the Cinnamon Roll French Toast ($15) or Signature Short Rib Benedict ($19), for example. The locale design has lots of potential but doesn’t look its best in morning light, unfortunately. Mains $19-38. Mon-Sun 24 hours. The Cosmopolitan. https://www.cosmopolitanlasvegas.com/restaurants/the-henry

Sometimes you just want a burger, and then you should go to Holsteins (unless you have the time to go to Bachi Burger). There are twists on traditional American burgers and snacks, all made in-house using organic produce, including sausages, buns etc. Make sure to get a milkshake, with or without booze depending on your mood. The Cosmopolitan. http://www.holsteinslv.com/

Casual high-end food might be a better description than simply “casual”. Perfection in every component with the sophisticated french cuisine served in a semi-casual setting (especially at the counter). The carefully choreographed and silent ballet by the chef’s is mezmerizing to watch. Not cheap, but you do get what you pay for. The MGM Grand. http://www.mgmgrand.com/restaurants/atelier-joel-robuchon-french-restaurant.aspx

The Golden Standard among Bistros, Thomas Keller’s Bouchon brings all that his original Yountville location is known for to Las Vegas. 10th floor of the Venezia Tower at The Venetian. http://bouchonbistro.com/lasvegas 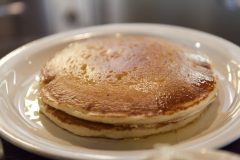 Old-school Las Vegas diner (that means a 90’s rendition of a 50’s diner) with food to match. Well made food and enjoyable from a cultural perspective, but far away from the (both literally and conceptually) from the modern eateries at Wynn and Cosmopolitan. The best pancakes in America according to Esquire, makes we wonder which century Esquire lives in. Golden Gate Casino at One Fremont Street. http://goldengatecasino.com/dining/

After running Bellagio’s pastry and dessert section since 1998 and winning double gold medals at the World Pastry Team Championships (2002 as a team member and 2004 as a coach), Jean-Philippe Maury created his namesake, ultimate version of a pâtisserie at Bellagio and later at Aria. Total opulence and decadence combined with solid and perfected foundations makes this style with substance in a way only possible in Las Vegas. Multiple locations: Bellagio (Spa Tower) and The Aria. Mon-Thu 6 a.m. – 12 a.m., Fri-Sat 6 a.m. – 2 a.m., Sun 6 a.m. – 1 a.m. (Aria). http://www.jpchocolates.com/

Thomas Keller’s pâtisserie associated with his bistro, Bouchon. Classic french pastries with a few american nods, all made to his exacting standards. Multiple kiosks inside The Venetian. http://bouchonbakery.com/las-vegas/ 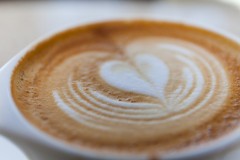 Classic both french and italian pastries and gelato. The M Resort. http://www.themresort.com/dining/babycakes.html

The summer of 2014 we undertook a little search for the best drink in Las Vegas, and the result was the Vesper at the Vesper Bar. 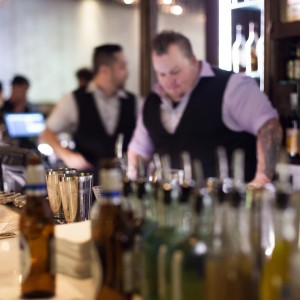 Vesper tops every list for the best cocktails in Las Vegas among the connoisseurs, has bartenders that truly master the craft and keeps a rotating list of the perfected classics. The Cosmopolitan. http://www.cosmopolitanlasvegas.com/experience/lounges-and-bars/vesper-bar.aspx 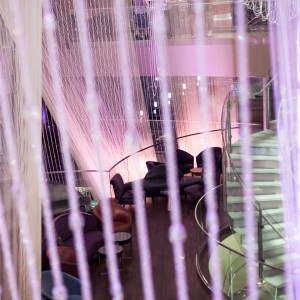 The bar is situated under, inside and on top of a giant chandelier. Each floor has its own menu and style, the top floor serves a wonderful Mai Tai called the Mai Crooked Tai in addition to the sublime Signature Cosmopolitan. The middle floor, inside the chandelier, caters to the molecular mixology crowd. The Cosmopolitan. http://www.cosmopolitanlasvegas.com/experience/lounges-and-bars/chandelier.aspx 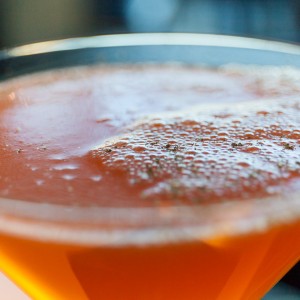 Like the rest of the Mandarin Oriental Las Vegas, the Mandarin Bar is designed by Adam Tihany. His design brings a sense of seclusion and calm while viewing out over the busy Strip. The drinks are very well made and suits the bar, the signature Golden Leaf and lemongrass Mojito stands out. Mandarin Oriental, 23rd floor. http://www.mandarinoriental.com/lasvegas/fine-dining/mandarin-bar/

Fireside Lounge at The Peppermill

This is proper old-school Vegas, not up to modern standards but it might be fun experience anyway. Featured in numerous movies and TV-series. The Peppermill, 2985 Las Vegas Blvd (opposite Circus Circus),  http://www.peppermilllasvegas.com/#lounge

Picasso: While certainly of a high standard, the restaurant feels a little dated and the french-mediterranean food a bit boring. Certainly not as exciting as two Michelin stars would suggest.

Carnevino: How hard can it be to screw up perfect meat? Easier than you might believe, a filet mignon ordered medium (we know) arrived rare with just a little bit of the outside seared and a BBL dry aged $61 New York strip steak was neither tastier or more tender than any “normal” steak we’ve had. The server forgot to ask how that one should be cooked and delivered it medium. Very expensive for mediocre food.