When I first started getting interested in finer mechanical objects Porsche Design was one of the first companies that stood out. Porsche Design Studio was founded by Ferdinand Alexander Porsche, grandson of Ferdinand Porsche and designer of the Porsche 911, in 1972 due to a change at Porsche AG that effectively prohibited family members of Porsche to hold executive positions within the company.

Porsche Design Studio is known for designing everything from sunglasses, writing tools, knives and watches to kitchens, appliances and industrial products. I find their writing tools particularly intriguing and offering a perfect blend of the modern Porsche Design language to a useful tool.

The P’3110 Tec Flex Rollerball is a classically cigar-shaped pen with a detachable cap. It uses braided steel sleeve with interwoven gold threads for the main body which is similar to the hoses Porsche use in their racing cars. Other parts are steel which is silver plated and finished with palladium. The pen is clearly designed to tie together the motor sports roots of Porsche with an instrument the owner can carry and use throughout every day. Something I as a petrol head can appreciate.

I think it looks sensational on its own and I can’t find one manufacturing flaw. Most impressive is the threads that are incredibly smooth and relatively short so that you don’t have to screw the cap excessively to remove it. Porsche Design always uses a clean, purposeful design language and this pen is no exception. 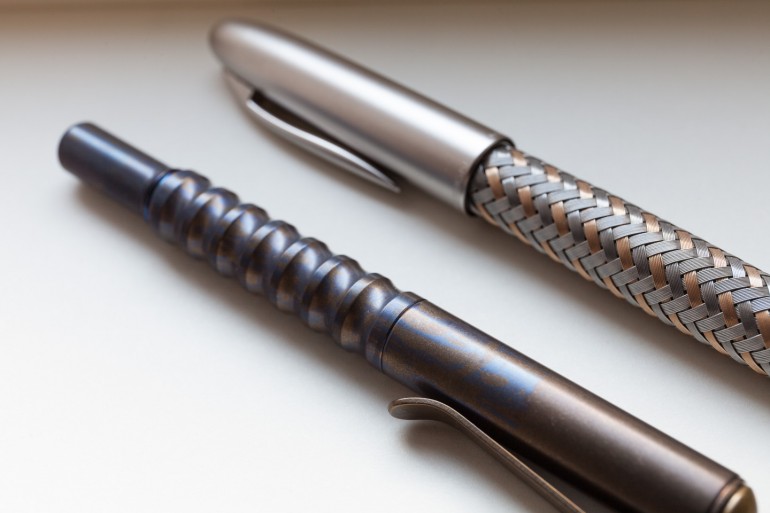 It’s quite thick but works for a range of hands. With the cap on it weighs in at 54 grams, without it 39 grams which makes it a little lighter than the Prometheus Alpha Pen (without the cap). The reason I compare it without the cap is that I find it very well balanced without the cap posted and it’s easily long enough. The cap can be posted by pushing it over four small bearings which locks it into place, should you wish to post it.

One slight disadvantage compared to the Alpha is that has a slightly lower precision when writing. I simply can’t write quite as crisp with this pen. It’s possible that it’s due to the Pelikan 338 rollerball cartrdige that I use, which otherwise provides clean, quick drying lines of similar thickness to the Montblanc rollerball. Its possible to vary the thickness a little bit more than that rollerball, but its still no ballpoint. 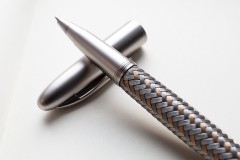 It’s hard to get the same emotional attachment to the P’3110 that I get to other items that display more personality in their design and a more human touch in their manufacturing. I guess with this pen it’s more about building your own connection to your car and weekend track days.

But it’s also hard to find faults, design and finish is at the very top and it works great as a writing tool. Some could feel limited by the Pelikan 338 cartridges, but I haven’t been able to try all compatible alternatives. As it is the Pelikan rollerball is not quite as good as the Montblanc rollerball, but its minute differences that’s only evident in close scrutiny.

Playing the World Series of Poker

The Five Most Beautiful Machines of 2014