Jason Hui made a name for himself as a master machinist creating hand-made LED flashlights under the names Dark Sucks and Prometheus Lights. He then branched out into creating pens through a very successful Kickstarter campaign (Prometheus Writes) and has also shipped the Beta QR keychain flashlight though Kickstarter.

His Alpha in-house flashlights are now almost impossible to get and Jason uses a TAD-like system of releasing small batches on his mailing list every now and then. He also has an externally fabricated version of the flashlight, the Alpha ready-made, that’s in stock. After the Kickstarter campaign the Alpha pens are generally in stock and available in a polished, electroless nickel plated aluminum version and also a stone-washed titanium version.

The Alpha Pen is designed to be an everyday pen whether you’re wearing a suit or more relaxed clothing. It uses a Montblanc ink cartridge since Jason Hui believes the Montblanc Fineliner is the best cartridge available. Many have described it as the ultimate EDC pen following good ergonomics, foolproof use with the screw cap and a readily available refill. The 3-piece design is a nod to the classic design of a pen and to provide the ceremony of unscrewing the cap before use.

A series of 10 unique titanium pens anodized by SlippySlug were offered on Ebay during September 2014 and I managed to snag one up. It’s a dark golden, almost bronze, stone wash with streaks of blue. I think it looks better in bright cool light than muted incandescent and would’ve liked the colors to pop a little more. But I really like the pattern and color combination and it certainly feels special to have a unique piece. From what I can see it’s identical to the other titanium pens except for the surface coloring.

It’s made in Jason’s own shop in California from solid bar stock and features his maker’s mark at the very top, something he only puts on the items he machines himself. A common feature of his work is that he leaves the machining without any finishing and notes that surface imperfections are common and meant to be there. The threads are made with really high precision and makes the coloring pattern match up every time the cap is screwed on. Jason also notes that the threads need some breaking in before they smooth out, but right now they are a world apart from the silky smoothness of uncapping my Porsche Design P’3110 Rollerball.

When disassembling the pen everything just feels solid. The lack of springs, spacers or other means of accommodating different types of refills certainly helps but it’s also the way the grip just locks up to the main barrel. When looking closer the machining marks in the scallops of the main barrel are clearly visible. The edges around the pocket clip also looks really rough and unfinished, just like the top brass nut. Since the rest of the pen is finished with a stone wash I can’t understand why these areas are either not worked on enough of left out of the finishing process. For me it detracts from the overall impression. 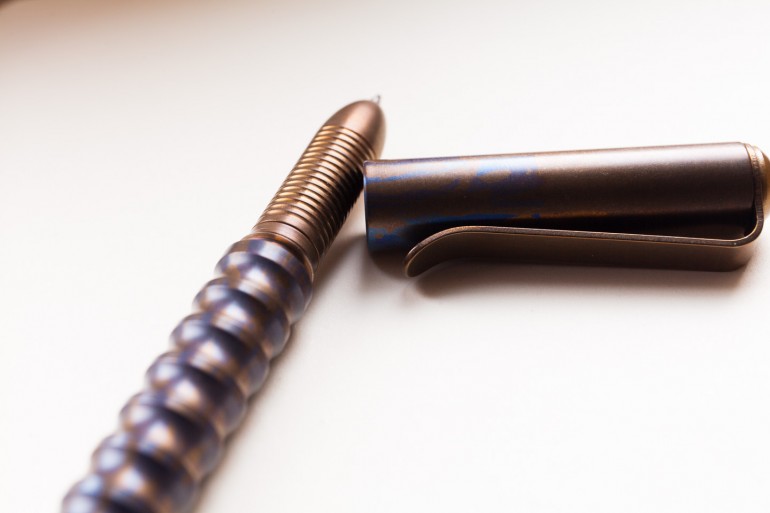 The rough finish on the sides of the pocket clip is visible next to the beautiful stone wash and anodizing.

Coming in at 49 grams the Alpha Pen is no lightweight, but not entirely out of line either compared with the 39 grams of the P’3110. It feels kind of heavy when writing with it and just slightly top heavy. The end portion of the main barrel is slimmer and although it sticks out from the hand it feels short without the cap. The front has a nice grip without being harsh and the thickness feels just about right. A surprising benefit of the barrel ending is that without the cap the pen fits smaller hands very well.

The Montblanc Fineliner cartridge favored by Jason Hui writes thick lines, too thick for most of my purposes but I can see the point for writing signatures or other oversized writing. The ink dries fast and it flows extremely evenly. Even on purpose it’s actually hard to make blobs. As a result it can’t really be used for shading or drawing but upside is that writing will look very even. It bites harder into the paper and more of the structure can be felt compared to the Montblanc Rollerball cartridge.

I prefer the Rollerball which has a finer liner and goes smoother over the paper. It also flows very even regardless of pressure, for better or worse. The Montblanc Rollerball is a really fine cartridge and I find that I can write with better precision than a Pelikan 338 Rollerball, even though that cartridge provides just a tiny little bit of variance based on pressure. For writing, this is as good as it gets this side of a fountain pen. Combined with the ergonomics it results in incredible precision and relaxed writing.

Overall the Prometheus Alpha Pen is beautifully functional and it feels like the design is way more refined than the actual finish and build. There’s no way around the fact that the pen is a brute. But the rough finish and machining marks also makes it clear that this is an object that has actually been built and crafted by a real person and not something that has magically appeared out of a factory. This makes the pen spectacular. It connects the origin and design of an object with it’s execution and final appearance, this is rare in a world of production outsourcing. While I would’ve liked at least the pocket clip and the end nut to be better finished, the total package makes me smile every time I screw off the cap and post it. Being a unique piece with the custom anodizing only makes this particular sample more special and inline with the overall concept of the Alpha Pen.

Deconstructed Boeuf Bourguignon – Our Take on a Regional Classic

Why is it More Exciting to Watch Chess than Endurance Racing?