Palace Grill is almost a modern folk tale, a small, mysterious high-end restaurant in Oslo, Norway that I only knew about from foodie friends who know somebody that has visited it. The restaurant has cult status and part of the reason is that until recently you couldn’t book a table, they only serve one continually changing, multi-course set menu at 1,200 NOK ($145) and the dining room is tiny and not at all what you expect from a fine dining restaurant.

In a way, Palace Grill is the direct opposite of the modern fine dining restaurants like Maaemo and just don’t take themselves too seriously. The cuisine doesn’t have the same focus on exploring the core of a concept, and perfecting local ingredients and techniques to reach it. Instead it was more like a Parisian bistronomy with one foot still in a past era going at full throttle. There’s a relaxed attitude in a nonchalant kind of way, giving two fingers to the establishment and current trends of fine dining, except for the daily changing, many-course menu. 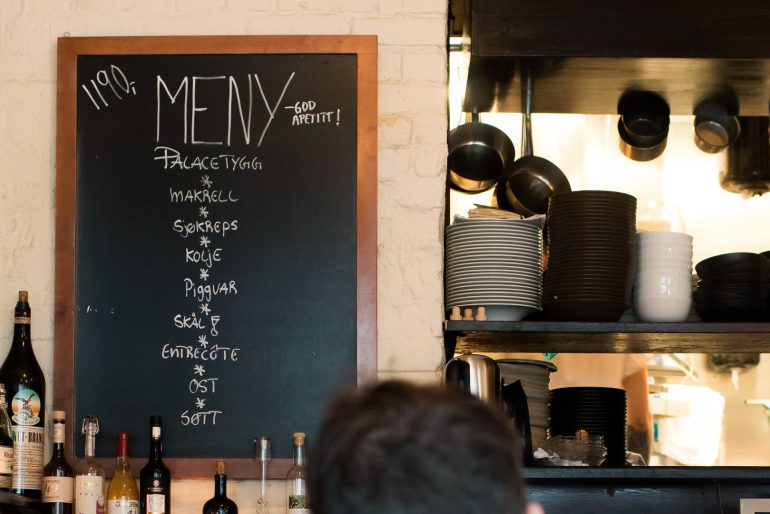 We were served nine courses with a couple of bonus dishes in between. The first couple of courses had a nice acidity and was very well cooked, even making the ingredients I sometimes have a textural problem with enjoyable (mushroom, langoustines and shrimp). One of the first proper starters, a fish soup with haddock, and a bonus dish with white asparagus and hollandaise sauce definitely felt like they came from the 70’s, both in terms of technique as well as overall flavor profile. These dishes did fit in the overall meal so I I’m not saying that they were bad, but I think that more up to date versions of them would’ve been better.

The waiters and cooks who served the food all have a lot of personality and mixes some descriptions that are very to the point , like “haddock, mushroom”, with long and personal descriptions. Our dessert was one these examples, with the chef saying “pickled rhubarb, burnt white chocolate, raspberries – damn nice I must say – vanilla ice cream, meadow buttercup, …” and continued with a dozen more components. 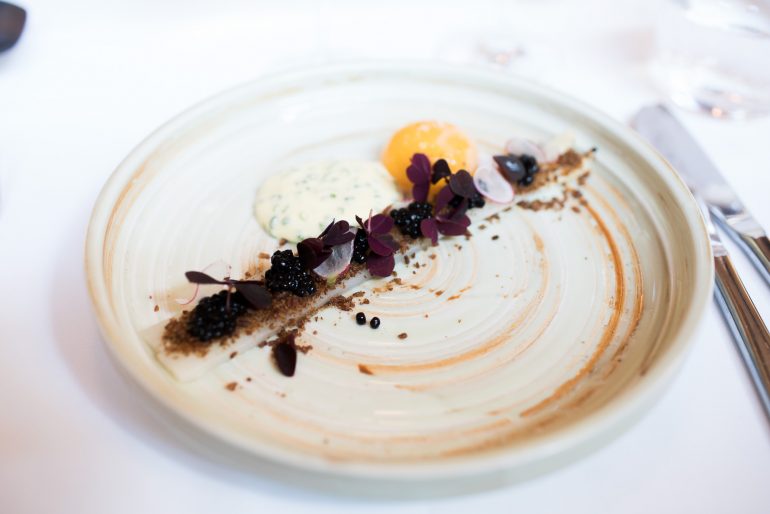 Highlights among the dishes was the mackerel with poached tomato and crunchy grains and the pan-fried turbot with fried kale and white wine sauce. Several other dishes stood out as well, among these were the white fish sashimi with green mousse and the first amouse-bouche consisting of a pastry with crème fraîche cream and fish roe that reminded me of a savory semla. The main course with entrecôte, root vegetables and mushroom creme certainly didn’t disappoint either.

Palace Grill is not what you expect of a fine dining restaurant, at the same time as it does deliver a great experience. Service is quick, on point and certainly contributes to the atmosphere. It’s a breeze of fresh air as a contrast to the New Nordic restaurants who do hold a better standard. The price is not unreasonable for nine courses with a couple of bonuses thrown in, but at the same time you don’t quite get the ideas and inspiration you would get from restaurants with a more solid foot in the modern cooking category. I feel like I could’ve cooked any of these dishes at home and without too much trouble served a menu with five of them. Go here for a great night out enjoying delightful course after course, but don’t expect a great gastronomic experience.

Sweeping the streets of Havana