One of the things that hit me in Tokyo is that the sheer size of the city makes it possible to specialize in ways we can’t think of in the Nordic cities. You have the gaming arcades in Akihabara, different styles of excellent bars in Ginza and Roppongi and some of the world’s best pizza places – like Seirinkan who only serves margaritas and marinaras.

But one thing I didn’t expect to find was a patisserie that also provides dine-in serving of some of the most exceptional desserts available anywhere in the world. As one of the staff members described it: ”When I was at Alain Ducasse in France it was all so simple; some crumble, sorbet and a little sauce. This is why I left.” This is not bashing the desserts of the world’s best restaurants, but after many other courses there’s only so much you can do in the broader context of the meal. By providing an experience where the dessert is truly the star there’s no holding back and you can create as elaborate creations as you want. 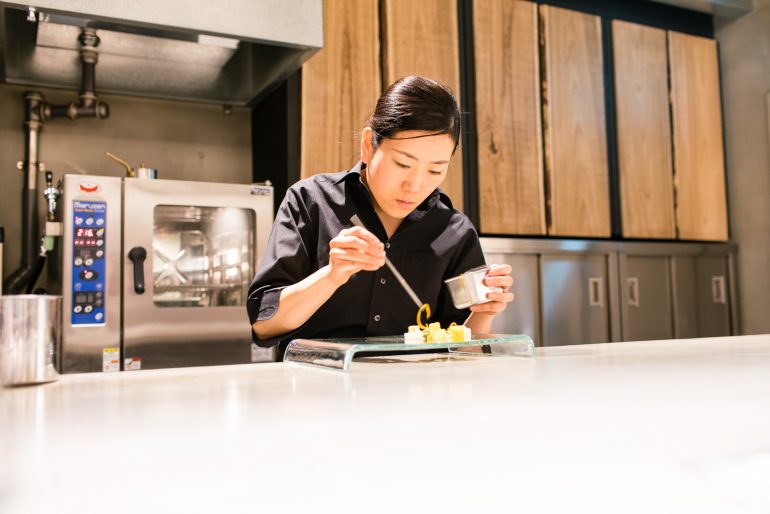 One of the chefs at work.

Located inside the Tokyu Plaza department store in Ginza, Esquisse Cinq is headed by Chef Kazutoshi Narita who provides the artistic direction as well as develops the creations. Inspiration is found everywhere, from art to other food.

At any given time there are a couple of Grand Dessert choices. There were three choices during our visit but I don’t know if this changes over time or not. I had the Soufflé and Jessica the Mousse. 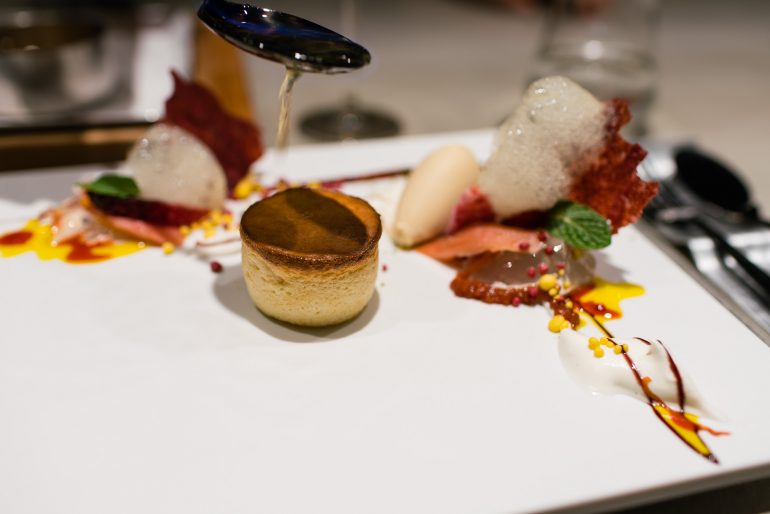 The Soufflé at Esquisse Cinq.

The soufflé was based around an orange soufflé en flambé, with variations of orange to accompany it. There was a wide range of textures, from gel to pastry cream to millimeter thin crisps, and also a range of acidity levels. When looking at it, it’s not just a plate or something that’s been built in height; it’s a fully three-dimensional landscape before your eyes. With all of the different components it’s a delight to mix and match and explore what specific combinations you like as you delve into it. This has to have been one of the best plates of my life.

The mousse had a golden egg filled with mascarpone, black truffle and clear sorbet. The base components were almost more savory than sweet in style, but the sweetness of every bite could always be adjusted with a vanilla syrup. 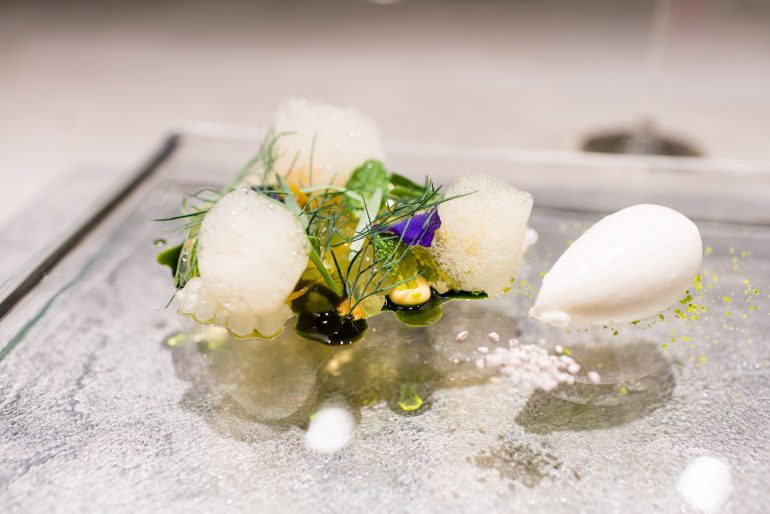 After seeing the third of the current grand desserts, the seasonal one, I just needed to experience that one as well. Luckily for me it was a refreshing and relatively light one, inspired by trying to recreate Chambreuse liqueur in the form of a dessert. Herbs and fresh acidity took the center stage in a vivid green and white creation. Once I started I couldn’t help myself even though it was the fourth dessert for the day and the clock only 16:00 in the afternoon.

Each Grand Dessert costs 2,000 JPY ($22) and for what it is I think it’s a steal. To even approach this level of haute cuisine you usually need to shell out for a full menu at one of the world’s top 50 restaurants and then you’re looking at 10-20 times that amount. Of course, you get a few other courses as well but you still need to pick restaurant very carefully to get any of the final courses that approaches this level of complexity and execution. For a foodie, Esquisse Cinq is a must visit when in Tokyo.

The best high-end restaurants in Oslo