Amass is a top-level restaurant in Copenhagen, with a strong focus on in-season and organic produce, even using greens from it’s own garden, but without the far-reaching experimental side that alienates and divides some guests to the most famous New Nordic restaurants. Amass serves accessible, gastronomic food in an open and cool setting, where Chef Matt Orlando runs a tight ship and uses his experience from The Fat Duck, Per Se and Noma to bring his vision to life.

The restaurant features an minimalist and open industrial design combined with Scandinavian furniture. The two gigantic murals are just beautiful and colorful details stand out from the textured, grey walls. It feels both edgy and high-end, but most importantly appropriate for the building and where the it’s situated. 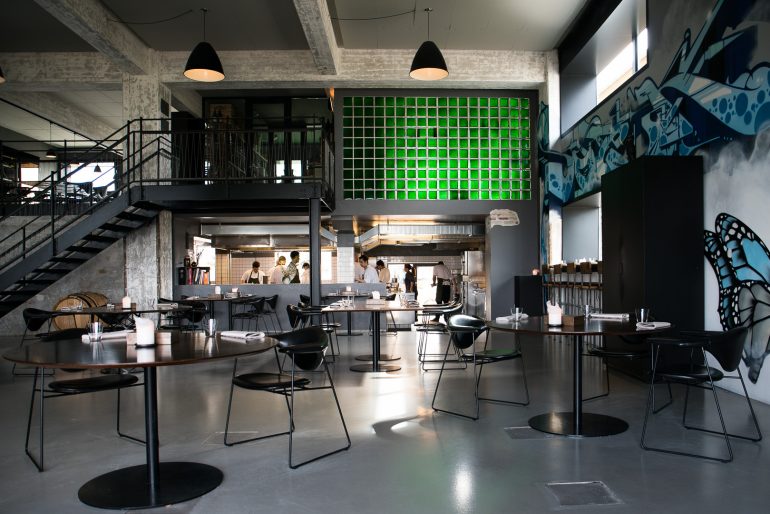 The chairs are really comfortable with an attentive, helpful staff. This makes it a very enjoyable to spend an afternoon here. Even though you’d think most guests take a car to get here due to the location, most sported walking shoes. Amass is located at the north end of Christiania, outside of the free town. If you’re planning on walking here, it’s a good way of getting some sightseeing done as well. Start by getting to Nyhavn, quite touristy but beautiful and very scandinavian with the colorful houses along the seaside, and an iconic location for Copenhagen. From Nyhavn there is a walking/cycling bridge to take you across the water and over to Christiania.

It’s and experience just to stroll through the bohemian Christiania and take in the somewhat different lifestyle. For example, in the water you’ll see half sunken boats, and several boats tied together in what seems to be a boat-collective straight out of Waterworld. After you’ve passed through the living parts of Christiania you’ll enter more of an industrial area and perhaps start to wonder if this is the correct place. Located in what seems like an old factory of some sort, is Amass, just take the stairs on the frontside and go through the corridor and down again to the dining room. 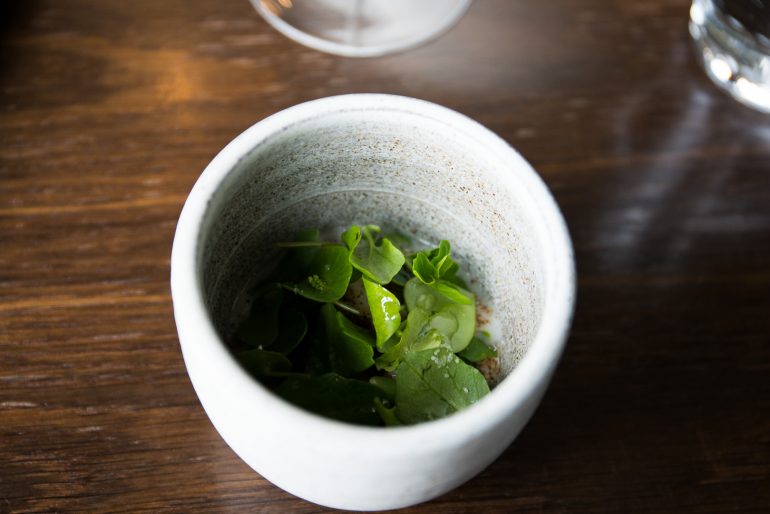 The second course at Amass was described as “Hot smoked Zander, Almond, Black Orange”. It was much more robust than what it looked like at first sight, with a clear smokiness that brought body to the dish that the orange brightened up. The dish looked a little bit similar to the first dish, salted brill with seaweed oil, but provided a very clear contrast and brought us into the meal towards the main course. The second course was the most complete and best dish of the meal, even though the last three dishes were more indulgent. 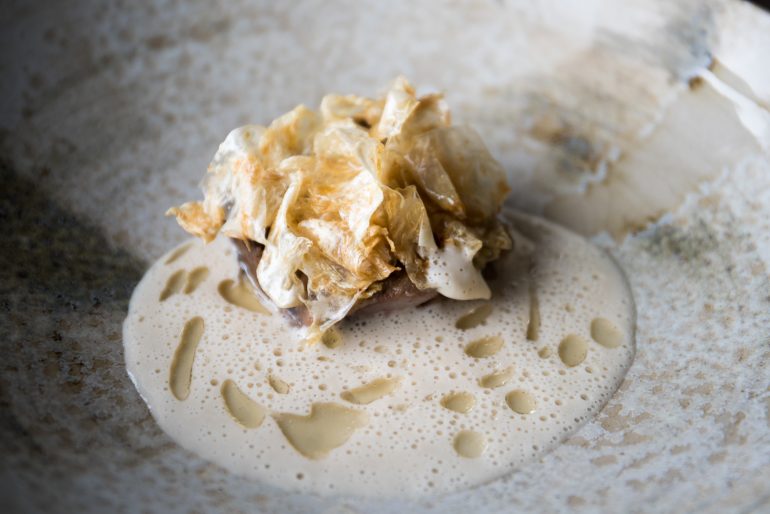 The main course, a peppery lamb neck with celery shards and soured cream sauce, was quite mellow and took a step back from the expressiveness of the second course. The clear sting of black pepper brought it to life though, giving contrast to the soothing cream sauce.

The pre-dessert at Amass was welcome after the four savory dishes. Neither sweet nor savory, but just perfect in between. It consisted of frozen creme fraiche with a green ground elder sauce, and some wafer thin sourdough crackers on top. 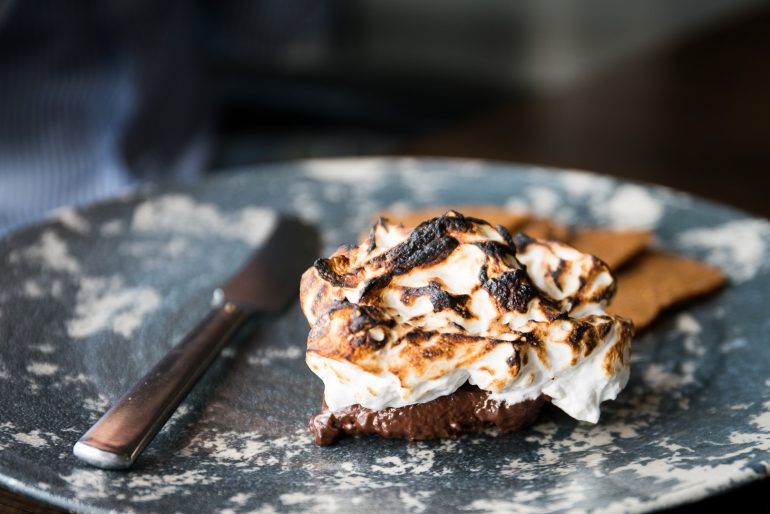 For dessert they had taken the concept of S’mores and make it both delicate and delicious at the same time. Traditionally consisting of campfire grilled marshmallows squeezed within a pair of crackers and a layer of chocolate, the components were precisely the same at Amass, but taken to perfection. The chocolate was a velvety ganache made out of Valrhona chocolate, the marshmallow were fluffy and creamy with a slight hint of rose, and the spiced crackers crunchy and full of flavour. This made us feel all giggly inside and was a very nice end to the meal.

All wines we enjoyed at Amass ranged from light yellow to deep orange colors as wines served are organic and ecological, since Amass wants to focus more on farmers than winemakers for their wine cellar. The wines we were served were a 2015 Buscaia, a Collecapretta, Umbria, a 2015 Confòndo Anfore, Casa Belfi, Veneto, a 2015 Falco Pergrino, Falconieri, Partinico and a 2005 Grand Pierre, Bablut, Anjou. They all matched the food better than good and were thoroughly enjoyable, but complemented the food rather than provided fireworks on their own. 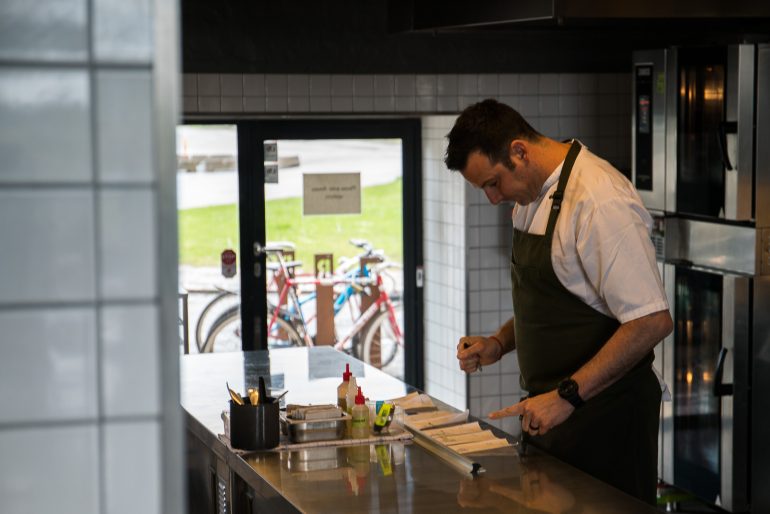 Chef Matt Orlando shares exactly how he runs the kitchen as it’s completely open to the dining room and all interactions can be seen and heard. Whenever a the order to a new party is sent to the kitchen a loud call to arms can be heard, but otherwise it’s quiet and efficient. In the dining room, all chefs take turns to present the dishes to the diners, including Matt himself, which puts us as diners closer to the skilled craftsmen that creates them, making them personally responsible and unable to hide to the customer but also makes us give credit where credit is due.

We didn’t know it was this restaurant, but we’ve been looking forward to encountering a restaurant like Amass for a long time. Restaurants like this are few and far between, where solid groundwork and craftsmanship is combined with great ideas to create an experience that has substance and meaning in addition to being extremely enjoyable.

The standard, five course menu is 695 DKK with wine pairing for 425 DKK. In addition an extended menu for 895 DKK is available for dinner and a reduced lunch menu for 395 DKK. At these prices Amass provides great value for the money, but more than that it’s an international-level experience regardless of price.

Sweeping the streets of Havana