Pulled pork has been a favorite of mine for quite some time, but I started to become obsessed with making a perfect pulled pork at home, in a regular oven inside an apartment, after visiting Franklin Barbecue and reading the Aaron Franklin’s A Meat Smoking Manifesto. I believe I cracked it a while ago, but I also wanted to develop a way to make pulled pork more relevant for the Nordics. I do love a classic pulled pork sandwich with a hot chili based barbecue sauce and coleslaw, or pulled pork served with a sweet potato puree, but creating a dish that would be more culturally relevant would bring it to the next level for me in my everyday life.

Pork is often served with apples, even applesauce, in these parts of the world and they make a nice pairing. So I started experimenting with an apple and onion chutney and found that it works very well, even more when adding a splash of Calvados (like the Boulard Grand Solage) which provides brightness and freshness to the chutney that balances with the body from the onion and sweet and sour base.

Next up was how to serve it, and it really isn’t much choice here. One of the most classic types of street food in Sweden is something called tunnbrödsrulle, basically a hot dog and mashed potato in a wheat tortilla. The pulled pork and apple chutney makes for a perfect wrap, whether you want it on a summer day or after a day in the ski slopes. 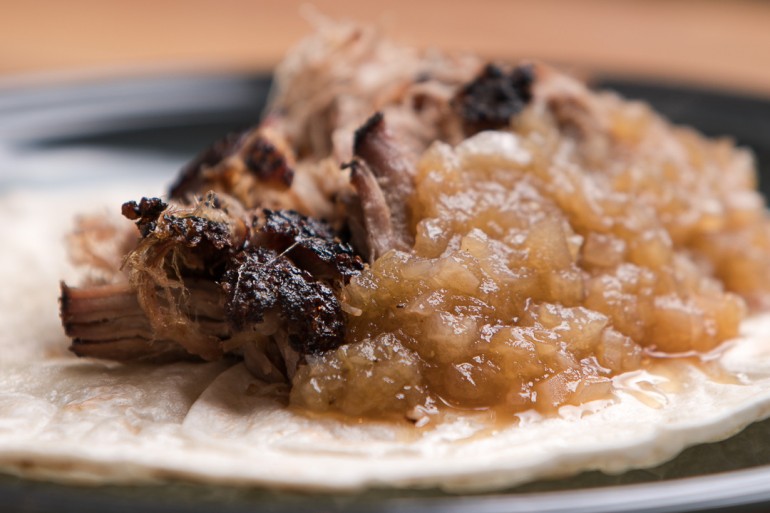 To make great pulled pork indoors you just need to fake the smokiness and then make sure to get a nice crust, while getting the inside as tender as it should be. There are a couple of tricks that would border to cheating if a smoker was used, but when we do it inside we only care about the end result and not the purity of how we arrived there. Liquid smoke and sugar in the slather (the liquid mixture used to make the salt and pepper stick to the meat) is the key to getting the smokey flavour and a nice crust, while the wrap protects the crust and steams the meat to fall apart tenderness.

I really like a black pepper driven (Texas style) rub with a little vinegar and rum in the slather to contrast and stand up to the pepper. Pulled pork is traditionally made with pork butt but I’ve also had great success with pork belly steak. Add a little curing salt (sodium nitrate) to the rub to create a smoke ring for that extra step of fake awesomeness.

8 wraps (6 hours to prepare and cook) 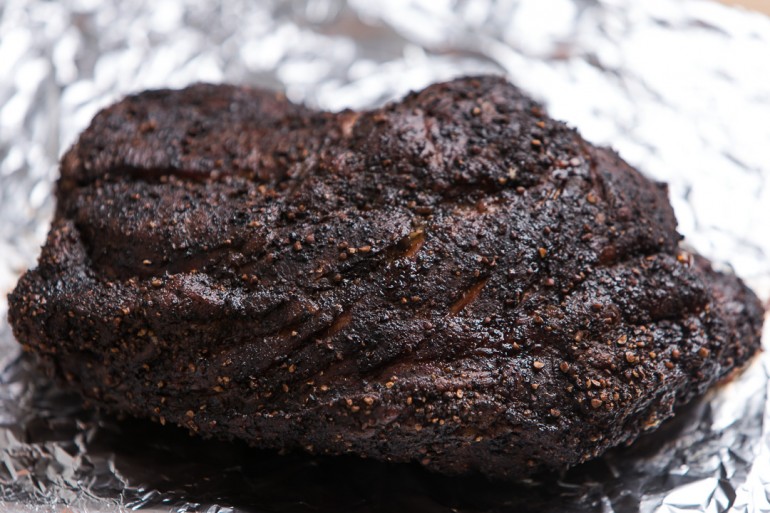