Jaeger-LeCoultre and Aston Martin have a long history together (Aston Martin used Jaeger meters back in the day, for example) and share many brand values. They also basically have the same target audience with people who appreciates functional, classy, timeless design combined with high quality and performance. The fact that both companies are on the same level really helps here since it means that it’s not a case where one company sees it as an excercise of pushing the brand and the other of making a quick buck from a new fan base. This is a closer look at the AMVOX2 Chronograph, a defining watch from this long going collaboration.

The first modern collaboration between the two companies was the AMVOX alarm watch in 2005. It was largely based on the MEMOVOX Tribute to Polaris (but without the date quick set and using a sapphire crystal instead of plexiglas) but a few design elements set the tone for the entire range of future AMVOX watches. In 2006 the AMVOX2 Chronograph was released, this watch carried over some of the identifying elements from the first AMVOX but also introduced a unique vertical trigger system for the chronograph negating the need for push buttons on the case. It’s bolder in design and really pushed the AMVOX range away from the rest of Jaeger-LeCoultres offerings. When it comes to brand collaborations, this is clearly the way to do it, creating something new that’s also true to both brands core values (even though JLC is clearly the product owner of the AMVOX).

All in all, 3797 AMVOX2 watches were produced between 2006 and 2010 (not including Transponder watches that could unlock your Aston Martin car from a distance). The original model was made in three different versions with different cases and slight variations of the dial; the natural titanium case (750 pieces), the black PVD titanium case (500 pieces) and the platinum case with a grey dial (200 pieces). Later a few more versions were released such as the DBS with an open worked dial and the Grand Chronograph with the slightly larger case of the Transponder watch, most of them in titanium but there were some in platinum, stainless steel and rose gold. We’re taking a closer look at the natural titanium version from the first generation.

The watch is sporty, elegant, functional and very much in line with the underlying philosophy of Aston Martins cars. It features one of the most usable complications in the form of a chronograph, the complication that’s also the one most associated with fast cars and overall “sportiness” due to its ability to measure lap times. What sets it apart is the mechanism for controlling the chronograph; it has a unique tilting case that let’s the user activate it by pushing the crystal, an innovation by Francis Cretin that really cleans up the look. This together with strong but classic proportions, nice details, usability, good finishing and a very unique look that reads from far away makes it a proper concept watch and perhaps the most accessible one made using true horological methods and also the perfect companion to an Aston Martin.

Car watches have been getting an ever worsening reputation among watch enthusiasts from all meaningless branding exercises, but this timepiece is clearly something else. The only other car watch I can think of that so successfully combines the two brands and bring something new that work from a conceptual view is the Parmigiani Fleurier Bugatti Type 370, clearly not a bad place to be for the AMVOX2. 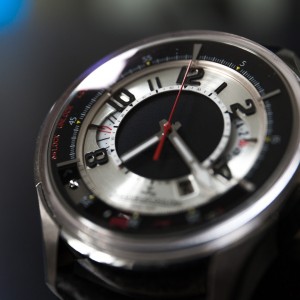 The deep and detailed dial.

Being made from titanium it’s very light, making it both comfortable to wear and also in line with the overall goal to minimize the total weight of a sports car (when reducing weight, no matter the application, every single gram adds up so that’s not an empty feature in my book). It has a high contrast, multi layered dial made from a black inner circle and outer ring that makes for a very graphic dial but also one made with lots of complexity and detail without it taking away from the readability. The hands are perfect in length, just touching their respective indexes. The hour indexes and large arabic numerals are on a 270 degree track hinting to the speed- and tachometers in the cars, a distinctive feature among all AMVOX watches. For a chronograph the dial is very clean, it has two sub dials (at 3 and 9 o’clock) for the minutes and hours but the openings for these follow the inner black circle and inner hour track. The background of the sub dials are white luminova so they largely disappear from the overall view due to the brushed silver ring. The numerals in these are a little hard to read and the minute hand sometimes block the minute chronograph but its no worse than other sub dial chronographs.

When seeing it from a distance I first thought it read a little bit too graphic, especially the black PVD version, but on the wrist it really comes into its own. Somehow it settles down a bit and it merely becomes distinctive, any watch aficionado will be able to spot it easily but bling seekers will ignore it and keep looking for steel bracelets, gold and diamonds. As I said earlier, it’s an elegant and classy watch for the connoisseur that’s never out of place, regardless of company. A minor gripe is the included strap, it’s a black calfskin strap that works fine with the watch and the polished steel folding double buckle, but it’s just a little boring compared to the rest of the watch. The black PVD AMVOX2 has a textured basket weave black leather strap that’s much more appropriate and elevates the entire package instead of just serving a purpose. The pictured watch has one of those.

For the case a few different finishing methods have been used, the center portion of the case and the bevels on the lugs are polished while the rest of the lugs are satin brushed. It has no traditional bezel, the sapphire crystal encloses the entire front and maximizes the active area for controlling the chronograph. The back is also brushed titanium engraved with an Aston Martin logo and the unique number of the watch (the AM wings are also in the center black circle on the dial, but barely visible there). There’s no sapphire case back to view the movement, another hint that with this watch is not about flashing what you’ve got but appreciating what you know is there.

Jaeger-LeCoultre makes some of the finest production movements available anywhere and the hand assembled and decorated Calibre 751 is unique to the AMVOX2 chronographs, the Master Compressor chronographs and the Deep Sea Vintage Chronograph. The AMVOX2 uses the E-version that has some extra parts for the vertical trigger. While not a movement made from the ground up for this application, having a true in-house calibre with such limited use puts this watch above many of its competitors and into the category of those with serious horological credibility. It’s an integrated, vertical coupled column-wheel chronograph movement featuring JLC’s modern accuracy, reliability and durability improvements such as a free-sprung variable inertia balance, ceramic ball bearings for the winding rotor, laser welded ends of the balance spring and a full, screwed down balance bridge (the “Autotractor” movement family features). The movement itself is made to be as shock resistant as possible and while the watch doesn’t have the Master Compressors air-cushioned case, it means that you can use it as a daily beater without being afraid that it’s going to break. It’s Jaeger-LeCoultres first automatic chronograph.

There’s two mainspring barrels for 65 hour power reserve. Most people will never see the Cal 751 movement since it isn’t used in any watch with a sapphire case back, but Network 54 has published a press release with some photos by TJN of ThePurists where it can be seen. It has beautiful contrasting finishes with polished edges and brushed flats, for example. The fact that it’s used in a very limited amount of watches to begin with and in a unique setting in the AMVOX2 (with the case activating the chronograph functions) elevate the watch and movement combination to another level that is not often seen in this price range.

The date function is fairly standard with an opening at 5 o’clock. However, the main feature is the chronograph. On the left side of the case there’s a slider than can lock and unlock the chronograph interactions (the first and second position, respectively) or only allow the chronograph to start and stop but not reset (the third position). The actual interaction for starting and stopping the chronograph is performed by pressing the top of the crystal straight in and resetting by pushing in the bottom. The case pivots around the 3-9 o’clock axis and uses a red aluminum linkage system (visible in at the very bottom at the front) to transform the movement into a normal “pusher” motion for the movement.

My wrists are tiny, I always have to use the inner hole in watch straps and look out for lugs sticking out from either side of my wrist. For example, the Urwerk 103 just looks ridiculous on me even though I’ve seen plenty of women wearing one without problem. I’ve come to the conclusion that I have to approach watches 44 mm and bigger with a fair amount of caution. Somehow though, Jaeger-LeCoultre has cracked the problem of how to properly arch the lugs and backside of the case to really hug the wrist. Even though I still have to use the inner strap hole the AMVOX2 fills the wrist, hugs it nicely and is extremely comfortable to wear thanks to the low weight. The titanium case holds up nicely to normal wear and keeps its finishes.

I believe that you would not carry the black PVD with the same peace of mind due to the added risk of scratching it and getting bare titanium showing through. So even though it looks even more graphic and special, that might be one for the safe but this is the one to wear, like objects like this are supposed to be used. As hinted I think that this is a fantastic watch that’s one of the best, and most affordable, entries into the world of haute horlogerie.

Bold, subtle and elegant at the same time, it echoes the design language of Aston Martin and works perfect as a bridge between the brands. The later AMVOX2’s are much fuzzier and a lot of the clean, timeless design principles have disappeared with these making this watch unique even among its peers. There are loads of other high quality chronographs featuring rich histories and technical innovations at this price point, but none that are as clear in concept and with such a good overall execution as the original AMVOX2. In my opinion, this is one of the most desirable chronographs ever made, and that’s why I’ve bought one.