Eggs Benedict is one of the ultimate brunch dishes. It has a fair bit of history, with multiple origin stories from the late 1800’s. In one of these Lemuel Benedict, a New York stockbroker, told the New Yorker in the Talk of the Town column in 1942 that he walked into the Waldorf Hotel in 1894 and wanted something for his hangover. He ordered “buttered toast, poached eggs, crisp bacon, and a hooker of Hollandaise”, something the widely known maître’d hôtel Oscar Tschirky refined to toasted English muffin and ham together with the poached egg and Hollandaise. Among other things, Oscar is also credited with the Waldorf Salad.

In the other main story Mrs. LeGrand Benedict, a regular patron of the Delmonico’s restaurant in New York City, wanted to try something new for lunch.  After she had a discussion with the chef, Charles Ranhofer, he came up with the Eufa a’ la Benedick which was later published in his cookbook The Epicurean in 1894.

“Eggs à la Benedick – Cut some muffins in halves crosswise, toast them without allowing to brown, then place a round of cooked ham an eighth of an inch thick and of the same diameter as the muffins one each half. Heat in a moderate oven and put a poached egg on each toast. Cover the whole with Hollandaise sauce.” – Charles Ranhofer, The Epicurean.

What makes this origin story interesting is that Oscar Tschirky worked as the maître’d at the Delmonico’s restaurant before he became known as “Oscar of the Waldorf”.

In this Original Eggs Benedict recipe, we explore the Lemuel Benedict version with crispy bacon and toast to create a hearty version of the dish a little more suited for a Nordic winter cabin trip than a Sunday brunch in the city. Use whatever toast you like, we like individual rustic, sourdough wheat rolls (in Norwegian known as “rundstykke” and in Swedish “fralla”). For the established version, just follow Chef Ranhofers recipe above. 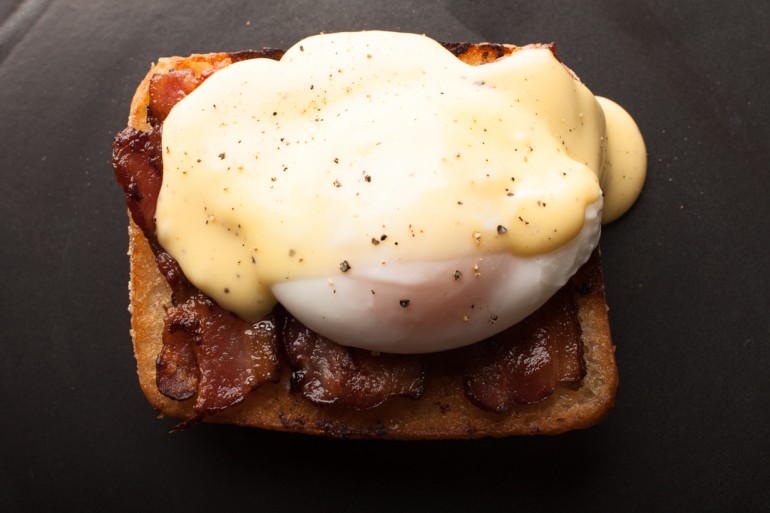