Eating out is expensive in Norway, most lunch dishes and casual dinner courses costs 150-175 NOK and a main course for dinner 350-380 NOK. Fast food like pizza, sushi, fish and chips and burgers cost the same, so adjust your expectations accordingly. There’s no strong pub or bistro culture which means that most casual dining places serve foreign food, although usually with Norwegian ingredients.

What they do have a local culture around is beer and has many local micro breweries producing excellent beer in a wide variety of styles. The beer culture has led to the first steps towards a more serious and exciting casual eating scene, but it’s mostly burger joints and coffee bars that lead this movement.

If you need a week-end style shortlist of foodie experiences in Oslo, make sure to include the following: 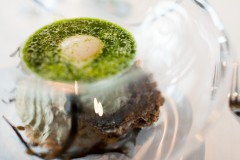 Modern, upscale restaurant serving paired back Norwegian food in the new Nordic style. Two stars in the Michelin Guide and ranked among the world’s 100 best restaurants, this is the high point of gastronomy in Oslo. The tasting menu costs 2,050 NOK and is worth every krona. Review of Maaemo. Schweigaards gate 15b, Sentrum. http://maaemo.no 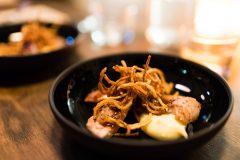 Fun and dynamic, one-menu restaurant with predominately Spanish cuisine. Could be the best foodie experience (except for Maaemo) in Oslo. The set menu costs 865 NOK and includes around 8 dishes plus amouse-bouches. Two seatings on saturday nights, more options on other nights. Review of Bon Lio. Fredensborgveien 42, Gamle Aker. https://www.bonlio.no 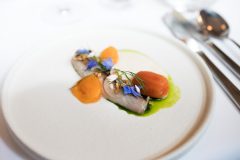 Microscopic cult-restaurant striking a fun balance of modern multi-course set menu with old-school style and technique. Loud and dynamic due to the small dining room and relaxed attitude from the staff, but still one foot in fine dining land. Set 9-10 course menu at 1190 NOK. Review of Palace Grill. Solligata 2, Solli Plass. http://palacegrill.no/

Great interpretation of new nordic food with many pleasant suprises in a more relaxed setting than Maaemo. The dishes are based around multiple small dishes, but each is more complete than you’d think. 50-225 NOK per dish, order more than 5 and they cost 129 NOK each. Central location close to Youngstorget. Marieboes gate 7, Sentrum. http://www.arakataka.no/

Modern asian-fusion food served tapas-style, to be shared with your friends. The menu could be clearer in explaining how the food is share between several persons, but the staff is helpful and the food is exciting and of good quality. You should order at least 3 dishes per person, and they start at about 90 NOK to 400 NOK, depending on which dishes you choose. A clear cut above the other high-end fusion restaurants (Ling Ling by Hakkasan, Nodee Barcode and Süd-Øst) when it comes to food, but not as impressive locales. Kanalen 1, Tjuvholmen. http://hanami.no/

Upscale seafood restaurant on Aker Brygge. The cuisine is international in style but also serve contemporary takes on classic Norwegian dishes when the season calls for it. Look for Lutefisk, served with bacon salt, around Christmas, for example. Mains from 295 to 365 NOK, meat and vegetarian options are also provided. Stranden 75, Aker Brygge. http://www.lofoten-fiskerestaurant.no

Modern, international take on seafood, good wine pairings. Some inventive combinations and modern techniques are used, but the cooking is not always up to scratch. Tjuvholmen Allé 14, Tjuvholmen. http://www.sjomagasinet.no/no 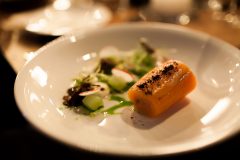 Stock is not quite a gastro pub, not a bistronomy and not a high-end restaurant – maybe it’s a Las Vegas-style Nordic-inspired bistro? Anyway, it’s the clear choice for a reasonable restaurant close to the central station or Bjørvika. Not as pure in concept as the gouermet New Nordic restaurants, but it also makes it more accessible. Draws a great balance of easily accessible local-inspired food that feels complete to everyone. Mains 275-330 NOK. Dronning Eufemias Gate 14, Sentrum/Bjørvika. https://www.stockoslo.no/ 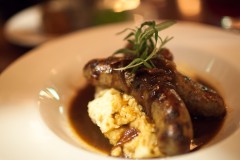 The premier gastropub in Oslo is situated a bit off in Nydalen but serves amazing home made bangers and mash (176 NOK) and succulent confit chicken thighs with potatoes (228 NOK). They have their own brewery in the restaurant but serves a wide range of local and imported beer. Nydalsveien 30, Nydalen. http://www.nydalenbryggeri.no/

The least expensive proper burger in Oslo can be found at Munchies. They serve a classic cheese burger for 92 NOK and the slightly more exciting BBQ burger for 98 NOK. The dining area is bare and extremely noisy at the Grünerløkka restaurant, better to grab a bag and go eat in Birkelunden. A serving of the excellent shoe string french fries (20 NOK) easily covers two people. Two locations, Torggata 18c and Thorvald Meyers gate 36, Grünerløkka. http://www.munchiesoslo.no/

Exciting pizzas one step beyond what you find in the thousands of pizza bakeries in Scandinavia. Incredibly popular so you’ll probably wait in line for a while, or walk straight up and order for take away. The N’duje (188 NOK) with hot sausage from Calabria, ricotta, broccoli and garlic is a highlight, but a classic like Parma (185 NOK) with proscuitti, Parmigiani-Reggiano and rocket salad also holds its place. Olaf Ryes Plass 8, Grünerløkka. http://villaparadiso.no/

An upscale, popular hamburger restaurant that features a “burger of the day”. Very good range of burgers and styles but the concept is sometimes better than the execution. Nice and properly crafted cocktails. Maridalsveien 13, Grünerløkka/Vulkan. http://dognvillburger.no/oslo

An american inspired diner with the food that goes along with it, for example hamburgers and pulled pork sandwiches. In general it’s a nice and lively restaurant (always packed), but a bit of hit n’ miss when it comes to the food. It’s never bad, but it becomes relatively obvious when they have the right chef in the right place. Seilduksgata 15, Grünerløkka. http://www.nighthawkdiner.com

A hip burger joint i central Oslo with a busy vibe. The place is small and offers seating for around 20 people, but they also have take-away. When it comes to the burgers they feel rather simple and reminds more of an advanced McDonalds burger, than a “gourmet burger”. However, the standard is quite good for being in Oslo, but does not quite meet the international standards.  Möllergata 23, Sentrum. Illegal Burgers Facebook page

A micro roastery and espresso bar in the neighborhood of Grünerløkka run by the 2004 World Barista Champion. They take coffee seriously, you won’t find any snacks to go along with the coffee here, but you won’t need to because the coffee itself is worth all your attention. Coffee is always served neatly with a glass of water, but you can also have it to go.  Grüners gate 1, on the corner of Fossveien. https://timwendelboe.no

Coffe roastery and espresso bar that are almost as serious about coffee as Wendelboe who also got themselves a World Brewing Champion in 2015, but they have a more relaxed attitude about it. Try the cold Kenya coffee straight up on a hot summers day, also serves coffe drinks and some sweets. Thorwald Meyers gate 18. http://supremeroastworks.no 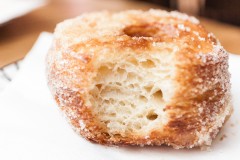 The best cronuts (35 NOK) we’ve found outside New York can be had at Maschmanns in Skøyen. Sometimes they have a crème anglaise filled version which is highly recommended. Coffee is ok but not up to scratch with the specialty coffee bars, but the range of sweet baked goods is superior in quality to all other bakeries in Oslo, they almost get a nod of approval for their brioche based goods. Karenslyst Allé 51. http://maschmanns.no/

During the summers Gutta på Haugen (delicacy food store) sets up an ice cream shop right by the bus stop to St. Hanshaugen. The gourmet-style double cream based soft ice cream is a unicorn we haven’t encountered any other place in the world. Home made toppings like caramel crunch makes us wish it was always summer. Ullevålsveien 45, St. Hanshaugen. http://grunerlokkabakeri.no

Vaaghals: The restaurant looks right at home in the Barcode development, a perfect blend of a modern, upscale traditional Norwegian setting and beautiful dishes that could be a Bistro offshoot of Maamo. But there’s no proper greeting or seating, the menus are not presented – we found out after a while that there was a second grill menu, there’s no cocktails, wine per glass or even beer listed. This could be excused if the food is great, but the actual dishes themselves are protein driven and incredibly dense while at the same time being dry, anonymous and just bland. Very expensive for a mediocre experience that could’ve been great.

Alex Sushi: Alex Sushi has two locations and are the top of the sushi-game in Oslo. While not being exactly bad, they are the best place to get sushi, they are just extremely expensive for what you get with food that doesn’t excite the way it should.