Fjord Norway is the part of Norway’s west coast with the most famous fjords. It stretches from Stavanger in the south to Kristiansund in the north and consists of four counties: Møre & Romsdal, Sogn & Fjordane, Hordaland and Rogaland.

A very special part of the region is The West Norwegian Fjords of the Geirangerfjord and Nærøyfjord which are both on the UNESCO world heritage list due to their exceptional beauty with narrow straits and high mountains steeping right down to the water. They were voted as the world’s best preserved attractions on the UNESCO list by National Geographic in 2009. While they are virtually unspoiled, you won’t be visiting them yourself in the summertime. But don’t despair, there’s lots of easy accessible areas where you’ll hardly see another person and can be alone with some of the most spectacular nature on earth.

The west coast of Norway is highly exposed for rain and quickly changing weather and is not the place to get a tan, but by choosing the back roads and taking detours to your goal destination, or when spending an extra day on a boat on the fjord, the area will give many experiences and memories that will last a long time, with or without a camera. This makes the area very well suited for road trips and is also a popular destination for super yachts. 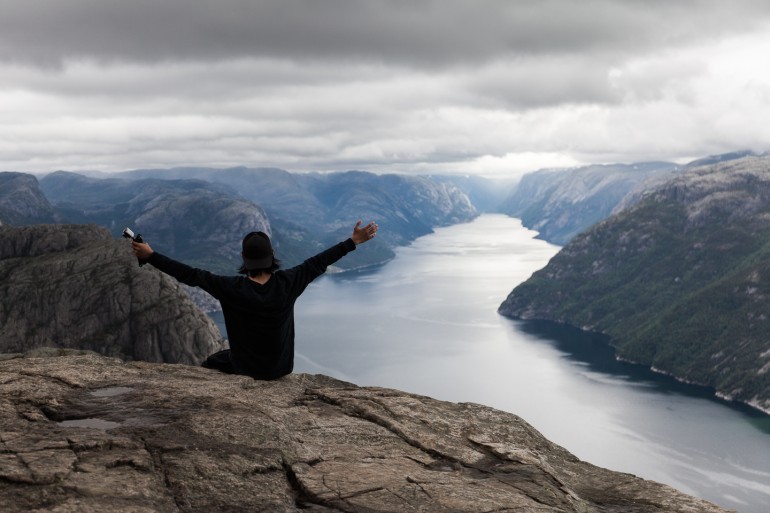 Someone feeling a bit alive dangling his feet 604 meters above the water below at the Pulpit Rock (Preikestolen).

During the summer, sleeping in Fjord Norway is probably best done directly under the stars. There is beautiful nature just about everywhere, and if you have a tent or a caravan you can place almost anywhere you like (because Norway has allemansretten) as long as it is 150 meters from the closest house. If you prefer just a bit more comfort there are plenty of camping sites along most of the roads in Fjord Norway where you get access to toilets, showers and running water. For more accommodation ideas, De Historiske Hotel & Spisesteder, the historic hotels and restaurants association, has more members spread over the area that will be a cut above any random hotel.

In the small town of Øye, with about 60 inhabitants, right by Norangsfjorden, is a rather spectacular hotel in a spectacular location surrounded by the Sunnmøre Apls. Hotel Union Øye was established in 1891, and has for long been a destination for royalties, writers and other dignitaries. This is also shown by the photographs of visitors in one of the hotels saloons.

Each room is different from the next, and inspired by different royalties and other important persons. There’s modern amenities, but it’s a living historic hotel and you can really feel how the past and present melds. A set three-course dinner based on local ingredients is served (615 NOK, 475 NOK with matching wines) along with one of the best Norwegian hotel breakfasts featuring many local specialties. Double room from 1390 NOK per night including breakfast. NO-6169 Norangsfjorden, Norway.  http://www.unionoye.no

Dotted in the landscape right next to Gudbrandsjuvet not far from Trollstigen lies Landscape Hotel Juvet. Paired back modern architecture made to enhance the surroundings meets the wilderness of the Norwegian nature. Seven double rooms and two single rooms are made as stand alone cubes on stilts with glass walls that connects with the surroundings. Book well in advance as the hotel is very popular and has risen to fame after the movie “Ex Machina” was shot partly on location and in the surrounding Valldal. Part in double room or the bed in one of the “birds nests” 1450 NOK per night per person including breakfast, three-course dinner 500 NOK. NO-6210 Valldal. http://www.juvet.com/en

Scandic hotels are normally not that special, and are regarded as a cheap business choice when choosing accomodation as they’re available in most cities. Scandic Ørner however, opened just in 2014 and is sleek, modern and fresh. Mostly directed towards conference and business clients, but fits perfect for private guests as well, especially during the summer. Double room from 1045 NOK per night including breakfast. Lars Hillesgate 18, 5008 Bergen, Norway. http://www.scandichotels.com/Hotels/Norway/Bergen/Ornen

Just south of Bergen lies Bekkjarvik Gjestgiveri, an inn that was founded by decree from King Christian Quart in the 17th century when he wanted suitable accommodation every half- to one day travel by ship. It’s driven by a single family where the two sons, Ørjan & Arnt Johannessen, runs the kitchen. Ørjan has been active in the competitive cooking scene and won the overall Bocuse d’Or title in 2015 after previously becoming the European champion in 2012. Double room from 1690 NOK. NO-5399 Austvoll, Norway. http://www.bekkjarvikgjestgiveri.no/

In central Stavanger, next to the other big chain hotels, lies this budget design hotel. Exposed concrete and dynamic artwork drives the interior design while a Scandinavian tree facade defined the outside. Rooms are small but contain all necessities except for a safe (small safety boxes are available in the reception area). Outfitted with a big and well equipped training room as well as a parking garage (100 NOK per day) under the hotel. Double room from 872 NOK/night including breakfast. Løkkeveien 41, Stavanger, Norway. https://www.nordicchoicehotels.no/comfort/comfort-hotel-square

Roast is the hotel restaurant of Scandic Ørnen in Bergen. It has a focused menu based around a mixed grill plate with a slider, pork tenderloin and beef ribs (295 NOK). It is located on the 13th floor in the hotel and has both a restaurant and a bar, limited wine list that’s out of date. Mains from 255 NOK. Lars Hillesgate 18, 5008 Bergen, Norway. http://roastfood.no/bergen/

Fjord Norway is not the place you travel to in first hand if looking for luxury shopping. However, there are some good places to visit to stack up on outdoor gear and clothes.

Ute.no is located in Bergen and Trondheim and specialized in mountain and hiking equpment. Nedre Korskirkeallmenningen 12B, N-5017 Bergen or Kjøpmannsgata 10, Trondheim. http://ute.no/

Norway is most known for its amazing nature and this means that different types of ecotourism are very popular. The Norwegians themselves love to hike and see it as their natural occupation on Sundays, which could be a reason that everything is closed on Sundays – including almost all grocery stores. There are climbing parks, river rafting, fishing and whale safaris available in addition to different ways of just enjoying the nature. Cruising ships and Hurtigruten are popular ways of seeing the coast line and the fjords, but the ferries you will encounter while driving almost work  equally well. 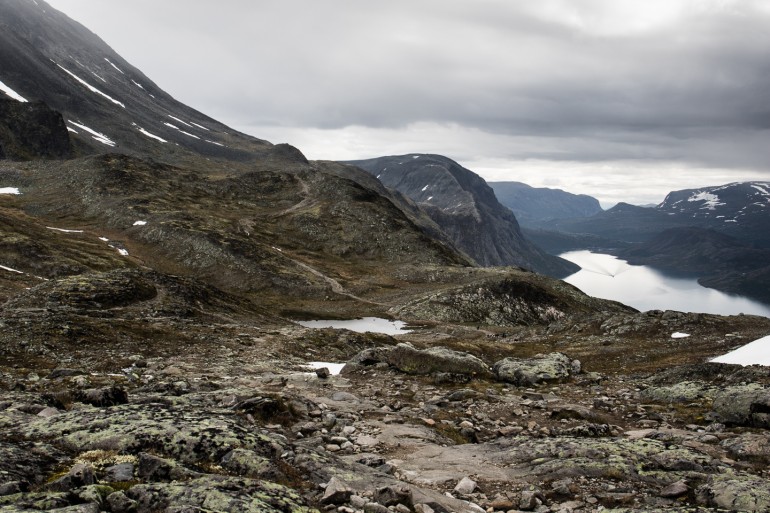 The Bess Ridge (Besseggen) center top-right and a little bit of the hike there.

There are many spectacular hikes of all difficulties available around the cities, in the national parks and just in the countryside. Most are one-day hikes – they have to be able to be done on the Sunday, remember? – with very good public access and transportation. These are five of the most known hikes:

All the mountains has made some fabulous roads along the fjords or over the passes to the next one. Just pick a goal and you’ll be greeted with flowing curves and lots of height differences. Some roads are narrow and some are mainly tunnels, but every once in i while you get to be alone and able to just enjoy what’s offered to you.

Atlanterhavsveien, an 8 km stretch of the national tourist road Atlanterhavsvegen between Bud and Kårvåg north of Ålesund is one of the most recognizable stretches of road anywhere on the globe and ranked at the very top of scenic roads that are attractions on their own.

Trollstigen is another globally famous stretch of road, only open during the summer months. This is the road for someone who likes hair pins, there are eleven of them on the way up the mountainside 850 meters above sea level. Be here before 9 a.m. to be able to have drive at your own pace. 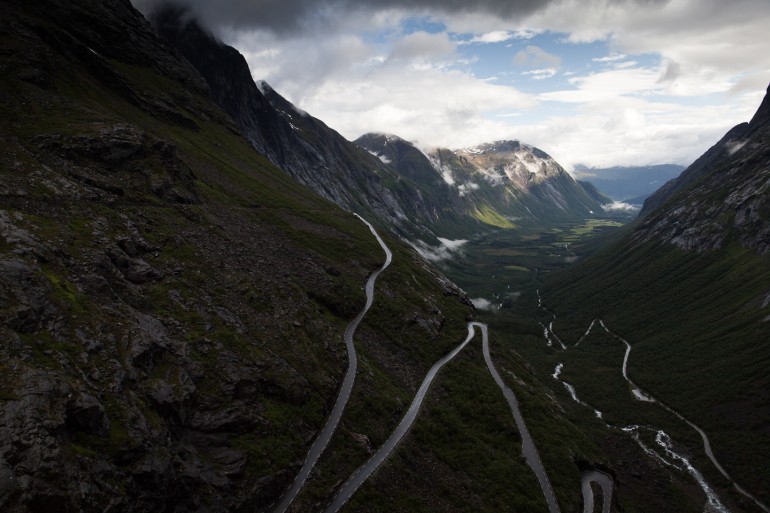 View over Trollstigen and the Ister Valley.