If you tell any Münich resident you’re going to Schumann’s Bar, they’ll most definitely know what bar you’re talking about. Internationally acclaimed and an institution in Munich, that’s the kind of recognition you get when you’ve been open for more than 30 years and still is the place to be (or be seen in).

Schumann’s Bar obviously doesn’t need to focus much on advertising or trying to lure guests in like they do in many tourist areas. It turns out, even if you know the address and the exact location it’s rather difficult to get in, not because of age restrictions or dress codes, but because the entrance is simply hard to find. We had to walk back and forth several times after spotting the actual location, we did find two doors but they definitely didn’t look like any main entrances, being largely covered by the heavy indoors curtains. Finally we just followed another man who walked in through one of these doors, but I’m honestly still not convinced we were supposed to use it (if you walk on Ludwigstrasse, it’s the first proper door after Filmcasino, turn left after entering to go through to the Bar, you first go through Schumann’s Camparino).

They moved to the current location in 2003, creating a contemporary and scaled back but still warm decor. It’s possible to get seating by the bar on an early Friday night (around 6pm) without booking, but if you want to arrive later it is recommend to get a reservation in advance, as all the tables and even the bar got “reserved” markers later on.

Once you’re inside you’ll quickly start noticing that this is a well-used place. Everything from the bar stools, the shakers to the coolers in the bar, show clear signs of many late nights, but not really in an of-putting way. It’s just obvious this place is well-visited regularly. However, bartenders in dirty, white jackets is a bit on my no-go-side.

There are many more indications that this place has been around for a while and is not necessarily practising continuous improvement as much as continuing a winning concept. From the uniforms of the bartenders to the food I can’t imagine much has happened for the last three decades. It’s of course charming in its own way and also a nice contrast to the new and modern style restaurants always pushing the envelope with new ways of cooking. Sometimes, oldies might actually be the goldies. 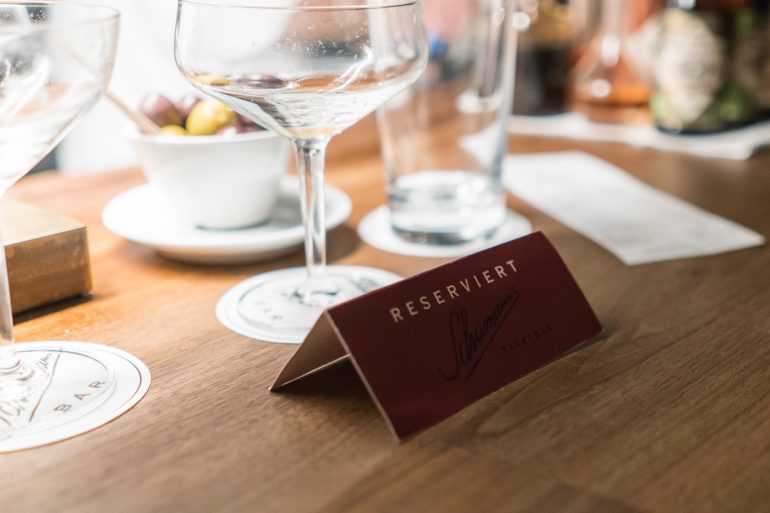 Now, did I have the best cocktail of my life, and was the meal memorable for years to come? No, not the cocktail or my dinner itself, but the overall experience I will for sure remember for a long time. I started out with an Old Cuban and the first thing that struck me was that the bartenders did not use any kind of measuring equipment. I know for sure many bartenders in your everyday bar, especially tourism friendly bars, doesn’t do this and see it as a false skill indicator. But most of the craft cocktail bars that takes mixology seriously use measuring devices to create a consistent end product each and every time. It soon became obvious the bartenders had worked there for a long time and were skilled in their craft. I would not have had too much problem with the non-existent measuring if they had only done some QA on the cocktail before serving it. My Old Cuban was a little off balance and muddy from only a single straining and not as coherent as I would have expected. For my second drink I ordered a rum-based classic and this time the balance was spot on.

My opinion is, if you’re gonna rely on judgement and experience when mixing cocktails, please ensure the balance hits before you serve the customer. Otherwise the results will vary too much.

So, to the food. We were given a short menu from the bartender (only in German), with both their classics and some dishes that seemed more specific for the day. He very patiently and with no hurry translated the entire menu and gave his comments on the dishes. We went for the chicken with potatoes and for the, according to the young bartender, most classic dish on the menu – roast beef with roasted potatoes. 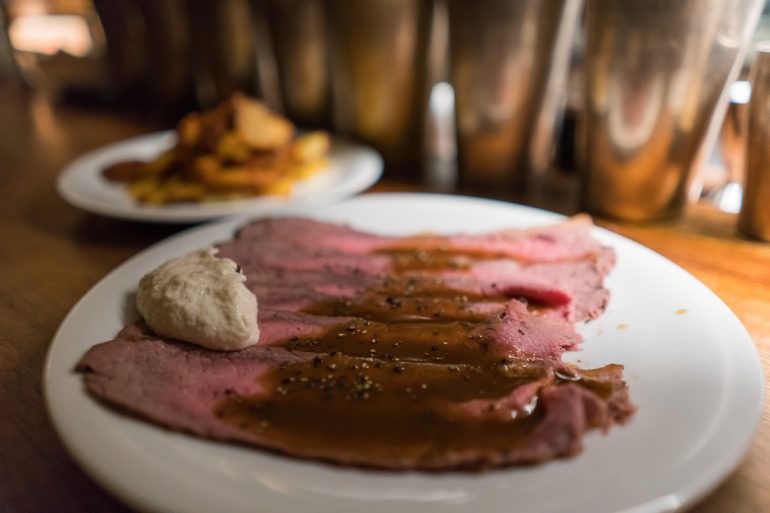 Plating and execution of the roast beef is something we could describe as “heritage”. Clearly hand cut, meaning varying thickness, potato discs roasted from a light barely cooked yellow, to crunchy, to slightly abused brown-blackish parts. The tender and perfectly pink roast beef was five thin slices of meat spread on a plate (that means, order a bit extra on the side if you’re starving), but nicely paired with a fresh horseradish cream. Spectacular, no not really, but decent and good food, yes absolutely. Just like the uniforms and much of the cocktail menu, this was a glimpse into another time.

The chicken, served with boiled potatoes and spinach, was not special in any way, but honest and naturals flavors came along with the dish. The food itself is very far from a memorable experience, but it’s quite decently priced and borders on good value for proper, real food. 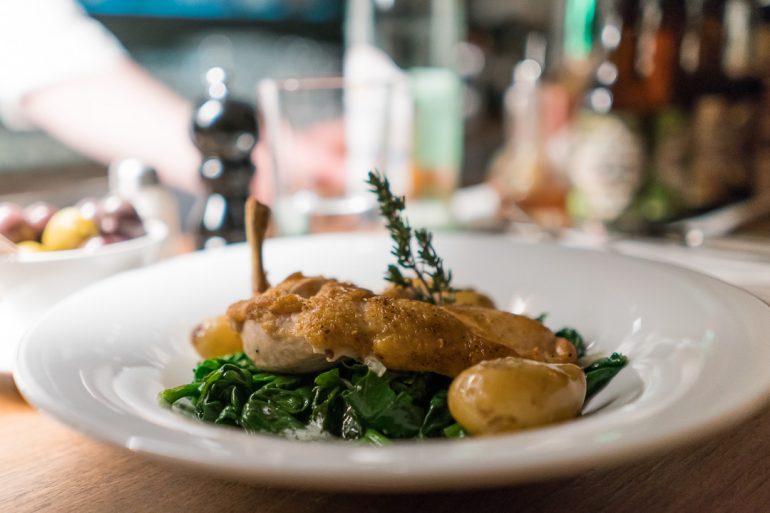 You don’t go to Schumann’s for the food or even the cocktails, though. You go for the ambience and what each element brings to the overall picture. Some patrons came in for a quick drink, some for a Friday family dinner, others seemed to have settled in for the night. The cocktails were good, just not world class, and Schumann’s Bar is a place we’ll always remember and would like to revisit.