La Guarida is one of the older paladares in Havana, being established in 1996, and definitely the one leading the new wave of privately run hospitality establishments that shows what Cuba could be. Semi-rustic food and drinks, which are probably the best in Havana, are served in a magnificent town house combining the very best of international luxury with the decayed Havana we love. Stepping into the building is like being transported into another world, if the streets of Havana didn’t already take you there. The building and restaurant has been used as the set of the 1993’s Oscar nominated movie “Fresa y Chocolate” as well as BJ Baldwin’s “Recoil 4”. Walking around in the building of La Guarida makes you feel like you’re in a movie and being a movie star at the same time. 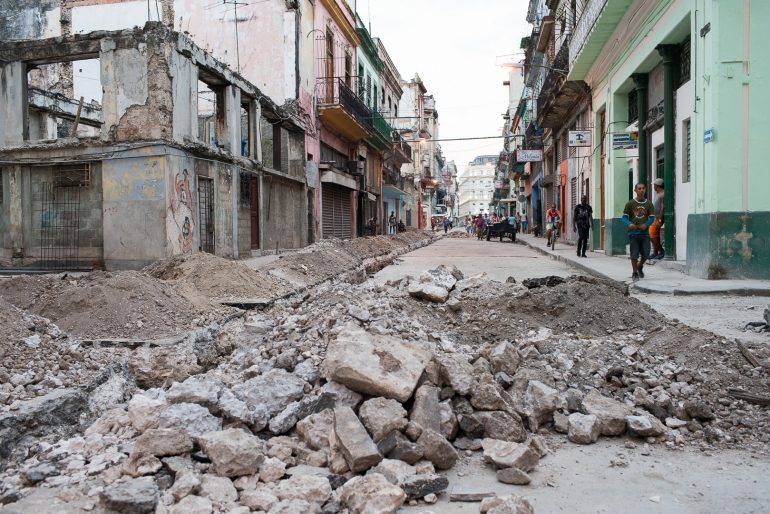 It would be easy to assume that one of Havana’s best restaurants is located in one of the fancier neighbourhoods, just like how Hotel Saratoga and Hotel inglaterra are located next to the magnificent El Capitolio. But the truth is quite the opposite, La Guarida is located in one of the residential areas of Havana instead of the business or tourist areas around El Capitolio and Old Havana. So if you, like us, decide to walk to La Guarida from Old Havana, you may likely end up walking on carved up streets. The houses in these neighbourhoods are most definitely what you would call rough, but it still doesn’t feel unsafe to walk around here.

Just like the streets, the staircases leading up to La Guarida, which occupies the two top floors, may not be what you’d expect. During the spring of 2017, when we were there, the first and second floor were going through renovations. After we were let in by the solid bouncer at the entrance we almost thought we were in the wrong place. There are few signs or other indicator suggesting you’re about to enter one of Havana’s top eating establishments, just instructions from the bouncer go on up to the third floor. On the way up, we were met by scaffolding, protective wrapping and stairs that definitely had seen better days. 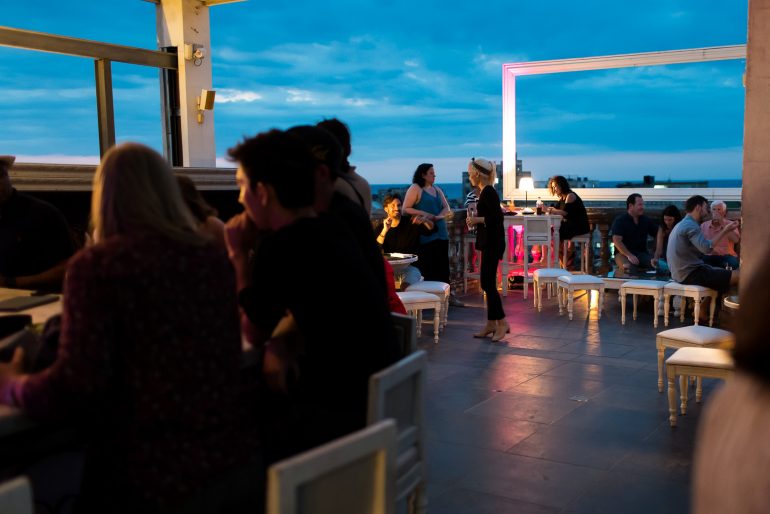 In contrast to most other restaurants and hotels in Havana, La Guarida actually has an electronic booking system with staff that are friendly and speaks very good english. We showed up early on purpose, having read about their rooftop bar, to grab a drink before dinner. Their bar is a true hidden gem and worth a visit of it’s own, if you didn’t book a table in time. This place is very popular with mandatory booking, the bouncer will kindly ask you to move on if you don’t have one. The bar is mostly placed outside with a white, giant frame with colorful lighting creating a scenic viewpoint over the city.

This creates a contrast of the old and rustic house that combined with the modern bar and trendy music is something we’d expect in Brooklyn. This contrast works really great and really made us feel like this was an honest and grounded place. It certainly didn’t hurt that they have their own signature drinks in addition to the mandatory Daiquiris and Mojitos – and that we had the best drinks in Havana at that bar.

As mentioned before, La Guarida have a well organized staff and when our table was ready for us, they found us up in the bar and we were showed to our table. There are several different dining rooms in La Guarida and they are spread across several indoor and outdoor areas. We were seated inside a smaller room where the walls were filled with old pictures of previous visitors. It was quite narrow and tight between the tables, but still they managed to provide a warm and genuine feeling. Neither chairs, glasses or cutlery matched each other, but that only added to the charm of the restaurant. 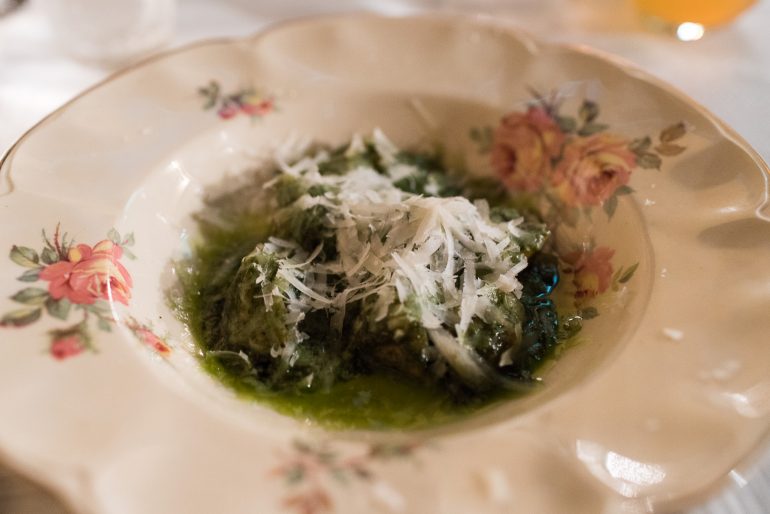 As you might have guessed by now, we were very happy with our visit just from the locale and staff, but how about the food? It’s not fair to compare the food at la Guarida with well known establishments around the world, but with the resources they have available and compared to anything else we tried in Havana, La Guarida is simply the best. By a mile or so.

The chefs at show skill in their cooking by using the ingredients they have and use them to their full potential. The dishes we ate were a blend of Cuban and international style cuisine, such as oxtail with saffron risotto ($20 CUC), ropa vieja ($16 CUC) with white rice and the cheese ravioli with pesto starter ($9 CUC). The risotto was not as creamy as it could be, but still showed the Cuban spirit of doing the best of what you have available.

If you’re travelling to Cuba, we can highly recommend to visit La Guarida, and especially the trip up to the rooftop bar.