If Schumann’s Bar is an institution, I’m not really sure what to call Hofbräuhaus am Platzl. The Royal Brewery in Munich was founded in 1589 on its current location, with the first brown beer brewed in 1592, after the Duke of Bavaria was dissatisfied with the local beer and wanting to limit the import from the Saxons. What was once the brewery itself is now perhaps the most iconic beer hall in the world after the brewing operations has significantly outgrown the capacity in the central Munich location.

The brewery enjoyed early success after poaching master brewer Heimeran Pongratz and serving the court of Wilhelm V. In the early 17th century, Maximilian I of Bavaria was tired of the traditional brown and heavy beer so he asked the brewery to cater to his tastes by making wheat beer. Simultaneously he also banned all other breweries to make this lighter and more refreshing beer. It was a success and also resulted in the famous, stronger Maibock beer. 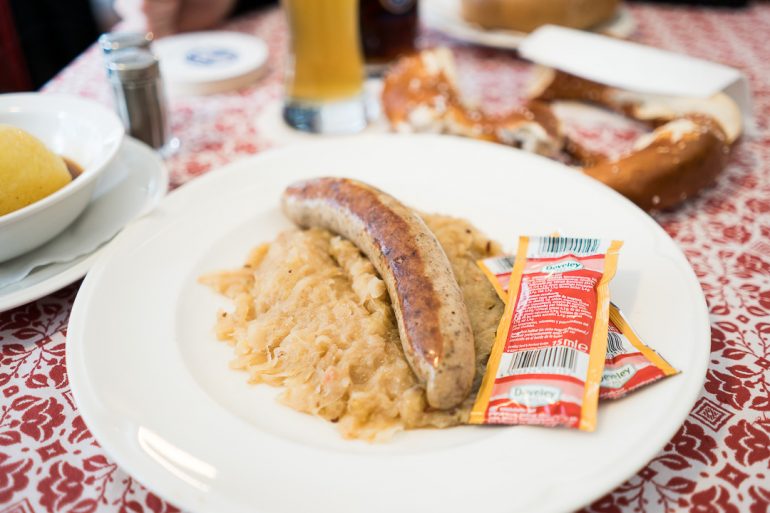 Much of the building was destroyed during the second world war, except for the main beer hall which occupies most of the bottom floor. The reconstruction was completed in 1958 with the Festival Hall and Beer Garden also brought back to life. The building just oozes with history but at the same time feels very alive. The vaulted ceilings and furniture, some of it more than 100 years old, certainly helps with this. Hofbräuhaus am Platzl is frequented both by locals and tourists and is one of the most popular attractions in Munich (after Oktoberfest). As a beer palace, the focus is on beer, traditional Bavarian food and having a good time. During lunch, afternoon and dinner there’s an Oompah band. It’s crowded everywhere, waitresses running around, music from the band, and you’re told “if you find a seat, just take it”. There’s no need for reservations, as long as you’re either willing to sit in one of the alternative rooms on the bottom floor or wait a little. With the amount of people here, the turnover is high.

After you’ve found a seat, it’s time to call the attention of one of the Dirndl dressed waitresses and order your first beer. They serve Dark Beer, Original and Müncher Weisse (€8.40/1l or €4.40/0.5l) – all historically inspired if not outright original and still adhering to the Bavarian Beer Purity Law. The beers are well executed and balanced but without some of the character that signifies modern craft beer. But for drinking lots of beer, which is what most people who come here seem to do, they are very purposeful. 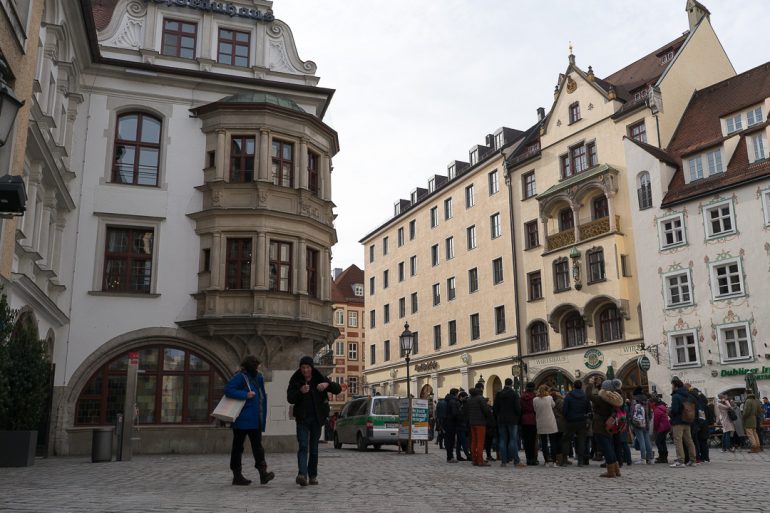 The food is also traditional and you can’t get away from getting some kind of sausage with sauerkraut. The sausage platter (€12.90) with four sausages is certainly more than enough food for a lunch, especially after starting off with a Goulasch soup (€4.50) and snacking on a Pretzel (€1.20). All food definitely tastes homemade and without short cuts, but it’s not the most refined experience. I would imagine that post-war food from the 40’s and 50’s was like this.

The whole atmosphere and experience is as Bavarian as you could imagine. The decor, food, band and waitress dresses are all from another age but fully alive. If you also manage to get there along with half of the city preparing for a Bayern-München game, you’ll most definitely get to know how crowded and uplifting the it can be.