é by José Andrès is one of the most exciting, if not the most exciting, restaurant that have showed up in Las Vegas during the second wave of the fine dining evolution that came with the opening of City Center. It’s certainly the most exclusive and at the top of the foodie ladder.

The restaurant itself is located within the Jaléo restaurant at the Cosmopolitan in Las Vegas. é is one of José Andrès two highly conceptual gastronomic restaurants that pushes the envelope for cooking in general and Spanish cuisine in particular. The 20-odd course tasting menu is changed more or less completely four times per year but there’s a gradual exchange of the dishes rather than swithcing it up in one big bang. José Andrès provides the general idea of dishes and works with the creative team at é and its sister restaurant in Washington D.C. (minibar), but then it’s up to the development chefs at each restaurant to bring these dishes to life in a format that is viable in a restaurant setting.

Eating at é is almost more similar to watching the bug budget shows in Sin City than eating at other restaurants. There are two performances per night and the chefs are the main stars. They do all of the final assembly of the dishes by the counter at which all eight guests are seated. The small and intimate eating room is styled to resemble the inside of José Andrès head, with drawers of reference cards, ingredients and such and crazy ideas popping out everywhere. 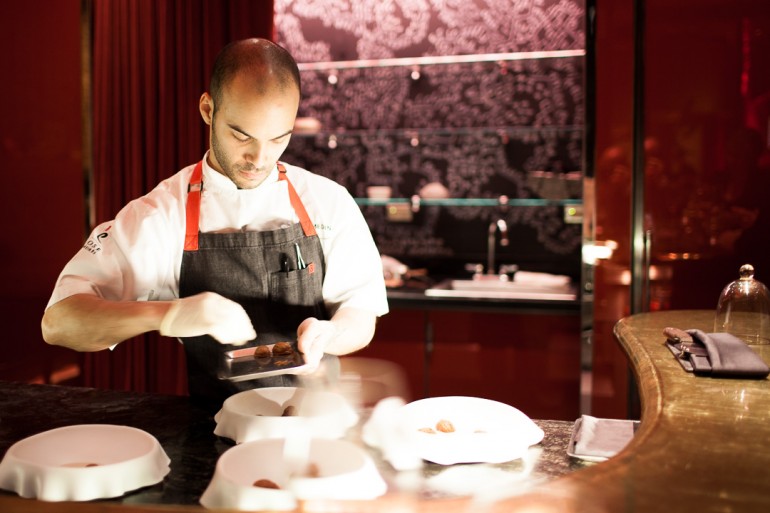 The experience of é starts three months before the visit, when it’s time to reserve seats. This process is manual and multi-step, but absolutely crucial due to the high demand for the 8 seats around the counter. They open up for reservations three months in advance and these go through email. If you are among the first to send the email, you will get a form to fill out with all sorts of details which then is scanned or faxed in together with credit card details over the phone. In today’s world of automation this feels quite antiquated and like something that could be solved better, especially for the ones who live in other time zones. Once you are finally confirmed you will receive a golden ticket for your seating, as long as you live in the U.S. at least.

When the day to visit é has finally come, the immediate impression is much better than the booking process. Walk up to the host at Jaléo and you will be offered something to drink and be seated with the other guests for your seating while you wait for show time. Since you actually experience é together with the other guests, getting acquainted beforehand is a good thing. The chances are quite high that you find other guests with a passion for great food since no one accidentally ends up at the restaurant – both due to the price but most of all due to the process of actually getting a reservation. 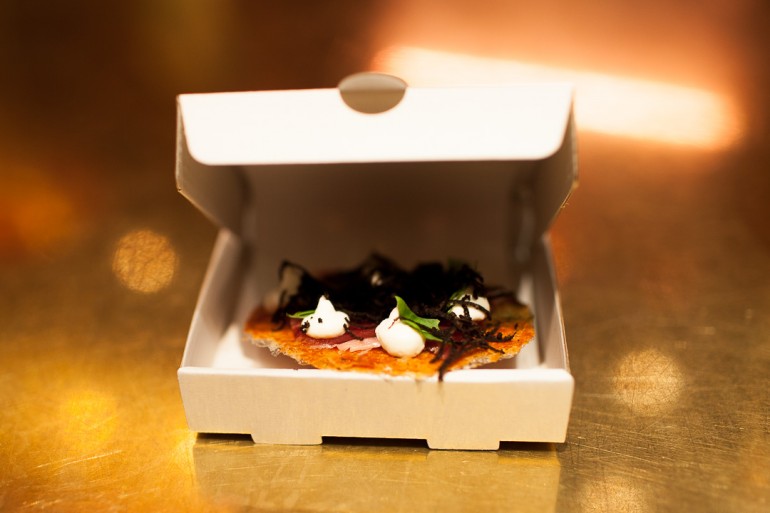 There’s only one menu at é and that’s a prix-fixe menu for $195. During our visit in late March there was an option for extra truffle enhancements for $65 since we were in peak truffle season, but additions like this are rare and seasonal. Beverage options are more varied with three levels of wine pairings, starting at $130 and going up from there, as well as an impressive wine list per the bottle. For two persons with the truffle option, base wine pairings, a starter drink, tax and gratuity the tab ended at an even $1000. A lot of money for one dinner, even if it’s an exceptional one.

First dish out is a frozen Sangria followed by a grissini-style truffle tree. The Sangria works really well as a palate cleanser just to get things started, and the truffle bread stick sets the mood for a traditional start of a dinner, even though they are quite obviously plays that go beyond the normal. 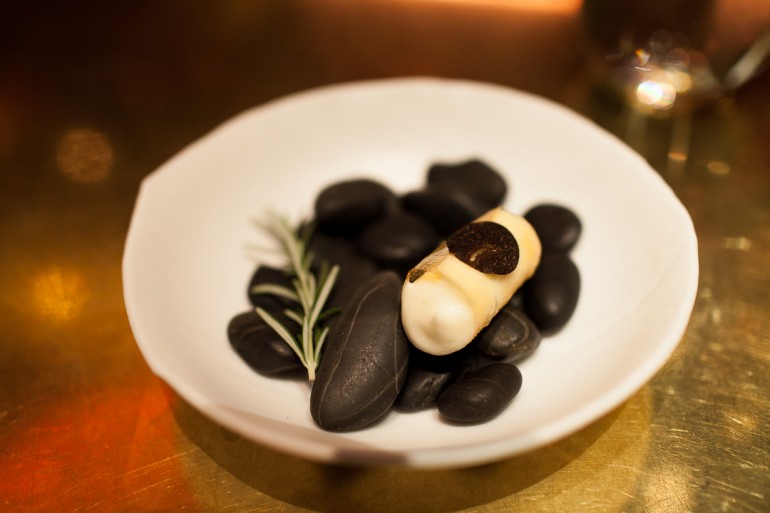 Third dish is one of the highlights, a warm potato foam inside potato glass. The delicate glass worked perfectly with the light, airy and silky smooth foam that really brought out the best of how a good potato tastes – and topped by a glorious little slice of black truffle. A Spanish pizza with Serrano and crème fraîche followed. This was one of the dishes that was enhanced by the truffle option, and a generous topping of black truffle was added. This dish was also one of the early highlights where the little box it was served in and the seemingly simple ingredients created a very fun and luxurious experience at the same time.

A couple more starters followed; a bocadillo made from duck liver mousse with orange served in what can only be descibred as Styrofoam bread made from orange meringue. After this a hazelnut or nutella caviar served with a tangy, creamy cheese with a crusty exterior. These weren’t quite as exciting or enjoyable as they could’ve been.

And then the Chupito was served. A chupito is basically a shot, and this is a liquid shot served as a sphere resting on a spoon. You simply take the sphere and press it against the inside of the mouth with your tongue until it bursts – at which point the actual shot is released. When it comes to the fun level of eating, this one is as good as it gets. Everyone at the counter laughed and was amazed, with almost everyone managing to keep the shot inside their mouths.

Dish number eight was oyster and caviar, where the oyster had been transformed into a crackling. The way the oyster was treated made it easy to enjoy for someone who don’t really enjoy slimy seafood and provided a really good platform for the caviar, both conceptually as well as practically.

After three more starters, a frozen scallop shell made from a scallop puree, a beetroot tartar and a Brandado bacalao made of a foam resting on top black truffle and some fried fish skin, that didn’t really hit it off with me it was time to go to the mains.

First of the main courses was a skate wing with some green, vegetable caviar spheres. Still after eleven courses the appetite was just starting to really get going and I was so hungry I just indulged this dish without really noticing much. I think it was enjoyable. 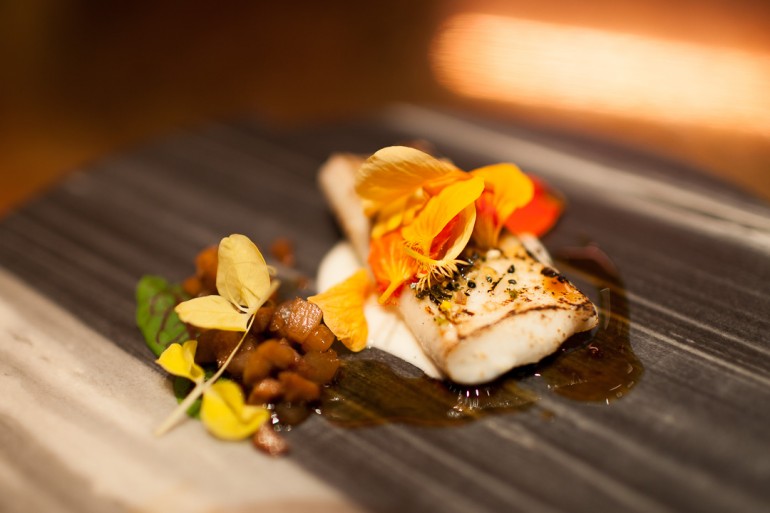 Second main course, and the best of them, was “Chuleta” del mar – sole with some type of chicken in a fine dices served on the side. The dish was mellow but complex at the same time, providing a little rest from most of the other dishes that pushes the envelope as well as your mind.

The final main course was suckling pig with crispy skin and sweet potato spheres, called “Cochinillo”. The roasted pig was showcased to the diners before being carved up out of sight and a big, beautiful piece of black truffle that had been standing on the counter throughout the dinner was being used for this dish. It’s in dishes like this you see that the chefs really use all of the techniques to bring the best possible end result to the table, with a skin that was crispy like crystallized sugar and an incredible succulent meat. The highlight was the sweet potato though, perfectly smooth and silky with a rich feeling which complemented to pig and truffle beautifully.

As a transition into the desserts, we were served a play on the Rosa de Santi Jordi. This is the rose given as a token of love on Saint Georges day, who is the patron saint of love as well as the patron of Catalonia. It was beautiful and good in concept, but the goat milk based dessert lacked sweetness, brightness and the actual taste of the berries used with a result that it was just dull.

A fun dessert was the “Empanadas”, a take on the filled breads that looked like it was more work for the chefs than the gastronomical level it represented, but still enjoyable nonetheless. They were made from pressed cotton candy and filled with some sort of crumble. There were lots of laughs while the chefs were preparing these. This was followed by an inside and outside take on Intxaursalsa, a creamed walnut dessert. In this the walnuts and nougat was reshapes into the shells and nuts themselves. 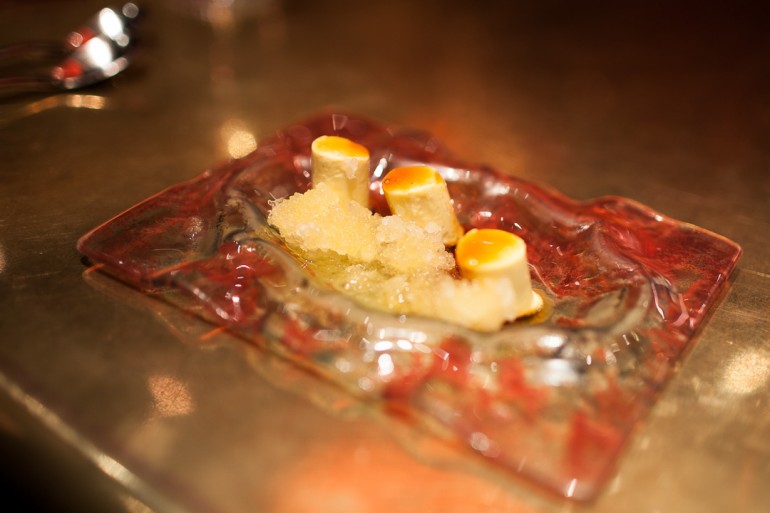 The main dessert was the flan. A series of vertical cylinders of flan surrounded by granita and caramel sauce. A very successful dish in all dimensions and something that really felt complete. After this one a series of smaller sweet bites were served, all enjoyable but none really special. Among them were a hand crafted version of Ferrero Rocher chocolate.

After these the staff was quick to wrap up, settle the payments and then simply disappeared. All guests were in a food-induced high, but it felt like a very abrupt ending. Throughout the meal the pace was really quite high, leaving almost no room to reflect on the dishes or to talk and discuss with other guests. Also due to the way you’re seated, this is not an intimate moment you share with someone; this is a show put on for you and the other guests. This isn’t wrong, but quite the opposite of most high-end restaurants.

On the other hand, é by José Andrès could be the ultimate foodie restaurant. Being able to talk to the chefs, see how they work and watch the dishes take shape is a unique experience. It’s a show like no other as long as your brain can keep up. Also getting the insight on how it’s like to work like this, instead of in other kitchens, was very interesting. But I can’t help feel that some of the magic is lost when you see the chefs struggle with a particular piece of the plating. 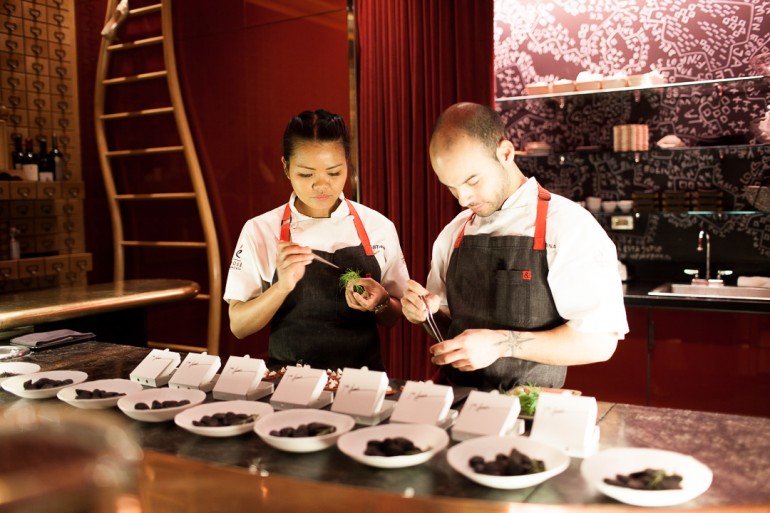 The chef’s plating the Spanish pizza.

The food served is molecular gastronomy at the highest level where the fun and crazy ideas of José Andrès shine through. But the finish is not always up to par for what you expect of a $1000 dinner for two. Compared to Maaemo in Oslo or The Modern in New York City the attention to detail is a clear step behind, and I also find that the overall experience is lacking in comparison to Maaemo where you get many more complete dishes for a more complete and complex journey instead of the isolated concepts and ideas at é.

The thing is that I know of few other places where you can get this experience. Having the show play out in front of you is extraordinary and something to remember for a long, long time. One of the other guests joining our seating was there for his 9th time. I understand why, it’s a continuously evolving experience and without going to northern Spain it’s hard to find this kind of cuisine. And with this format, é suits Las Vegas perfectly.