One of the very first pieces that caught my eye when I first got interested in watches was the Urwerk UR-103. Just the shape was so different from every other watch I’d seen and then to top it off with the revolving satellites to tell the time made me go bonkers.

What makes the company exciting is that they’ve broken free from all tradition when it comes to horology. Any complication they use is there to bind together the entire piece and the result are watches that rise above such earthly things as tourbillons and perpetual calenders.

Urwerk has consistently evolved their three-dimensional form language and the way time is read. Every angle of the watches are interesting and they have put the notion of a dial on its head. I absolutely love the timelessness of the UR-103 and the aggressive techno-look of the UR-210 but after trying these on I realized that I could never carry one due to my small wrists. So I started looking around to see if it was another Urwerk that would fit me and the UR-110 Torpedo looked promising. 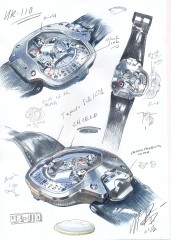 The UR-110 was introduced in 2011 and took the pointy satellite system seen on the UR-202 and UR-203 one step further and also rotates the main part of the watch to show the time to the right. The pointy end of the satellite now stays perpendicular to the watch itself and always points right out, like three torpedoes in a parallel formation. Combined with how the satellites revolve to change the hour numbers makes for a spectacular mechanical ballet when setting the time. During normal use the complex movements is too slow to fully appreciate, which is a good thing and by design. Otherwise no one carrying one of these would get anything done.

As described by Martin Frei: “There is something happening on the dial which is not detectable at first glance, not natural, but the fluidity gives the appearance of normality”. An understated movement at complete odds with tourbillons and similar complications. I don’t think either approach is better, but it’s nice to see someone taking a different route.

Reading the time is very intuitive and an added benefit of the sideways time display is that even with most of the watch hidden under a shirt cuff it’s still possible to read the time. This puts this watch in good company with the equally fantastic MB&F HM3 Frog.

Urwerk has never been about bragging technical specifications (except for the UR-1001 Zeit device, maybe) and the UR-110 is no exception. The UR-9.01 self-winding movement features a single barrel for 39 hours of power reserve. More interesting is the double turbines connected to the winding mechanism to protect the movement during rapid acceleration and deceleration.

UR-9.01 also features a day-night indicator and an oil-change indicator that tells when it’s time to service the watch. In order to make the torpedoes perform their synchronized dance there’s three levels of complexity working together. The first of these is a perfectly balanced central carousel carrying the three arms with the indicator pods. Compared to previous Urwerk satellite complications there’s a fixed axis used instead of ball bearings.

The second level is a planetary gear to keep the three hour satellites parallel to each other during the rotation around the dial. The final is the three counter-rotating hour modules themselves. They each consist of an hour satellite, minute hand and a counter balance mounted on the planetary gear.

It’s not an in-house movement as per the accepted definition, but is so heavily modified that it might as well have been. There’s no clear boundary between movement, dial and case. It’s all one three-dimensional sculpture. The finishing is thoroughly contemporary with mostly brushed, polished and blasted matt surfaces, but a perlage mainplate can be seen on the perimeter of the “dial” and the screw heads are chamfered and polished as well. 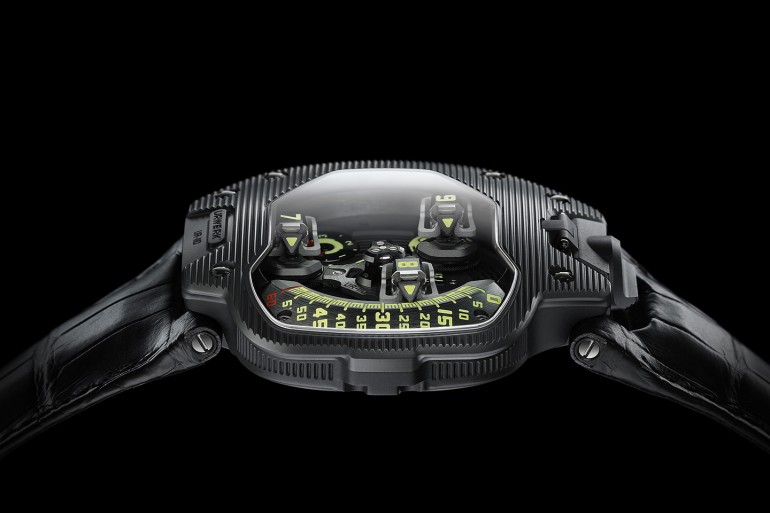 The Case and Variations

The case is quite large even for an Urwerk at 47x51x16 mm (width x height x depth). The contradiction is that for me it’s the most wearable, both the 50 mm UR-103 and 54 mm UR-210 stick out from my wrists which makes them unwearable even though they might be narrower and use less total real estate on the wrist. The secret lies in that the horns fasten the strap more on the underside than right out from the watch. The crown is situated at 12 o’clock which further enhances the comfort of the watch. A Grade 5 titanium case makes for a relatively light watch that’s comfortable to wear, combined with how easy it’s to read the time the result is a very practical watch.

The live photos are of the black and grooved steel-bezeled and AlTiN-treated UR-110 ST. I’m not sure if I love this version or the natural colored UR-110 TTH (Tantalum Hull) better. Both provide their own allure with the ST looking like a future piece of military gear, almost like a sci-fi version of the Jaeger-LeCoultre Master Compressor Diving Automatic Navy Seal. The grooved surface provides a tactile dimension the other versions lack and the ultra hard surface treatment makes it more of a beater.

There are a few more versions but the UR-110 TTH is my second favorite. It’s a more thematic piece; a spaceship with a tantalum blast shield showing off the dance of its torpedoes as they’re getting ready for use. This one is like a miniature sculpture you walk around with on your wrist that also happen to tell the time. The sand blasted and satin brushed tantalum bezel is in its natural gray-blue color and works extremely well with the rest of the watch. 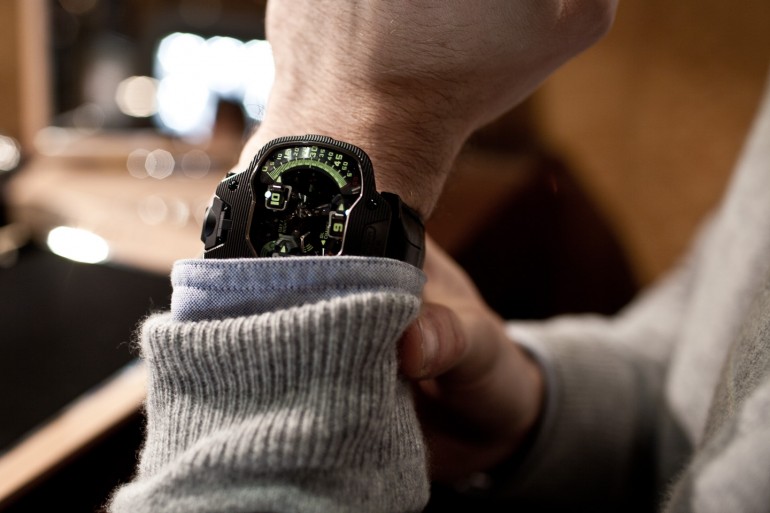 The UR-110 ST sits nice on small wrists even though it has a height of 51 mm. 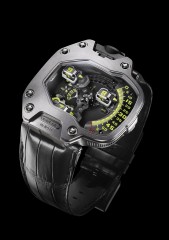 The UR-110 range is spectacular, based purely on looks I like the TTH best but as a watch I’d have to give the nod to the ST. Normally I like pieces that stand on their own and don’t use inspiration from other fields, but the TTH almost rises above that. I simply can’t make up my mind of which I like the most.

There’s not many people or companies around that can come up with the unique concepts Urwerk does and then to execute it to the level that they do. What strikes me the most is how such a conceptual piece can work so good as a watch and be so easy to wear. In terms of value it’s quite a bit more expensive than the UR-103 series at around $120,000, but it’s also one clear step above in terms of complexity. There’s not many other brands and watches to compare it to, the only I can think of is the MB&F HM3 which costs a little less.

When it comes down to its value is really hard to quantify, either you love these watches or you don’t, and either you can afford it or you can’t. With pieces as unique as the UR-110 Torpedo, there’s simply not many alternatives around. Thank you Urwerk, and keep making pieces such as this!

Update 2014-11-24: The final iteration of the UR-110 has now been released. It’s called the UR-110 Eastwood and has a bezel made out of Ebony wood. Ten watches will be made, more details at Quill and Pad.

Urwerk UR-110 Torpedo ST. Limited edition of 55, around $120,000 when new at retailers like Chronopassion and Bellusso.

Why is it More Exciting to Watch Chess than Endurance Racing?

Playing the World Series of Poker