There’s much that can be said about how conservative Norway is and that they as a people are somewhat reluctant to change. The stores are closed on Sundays and the Norwegians get positively furious when spare ribs are served any other day than Christmas Eve. But when it comes to electric cars, and especially Teslas, Norway have one of the highest densities anywhere in the world.

Without regard to propulsion systems, the Tesla Model S is one of the most popular cars with the highest number of new car sales in Oslo. Nissan Leaf is one of the other top combatants for that spot. This makes for a very unique street picture and a glimpse into the future for how cars will develop in other metropolitan areas. Discussions if 120 g/km should be the limit for a low-emissions car just seems irrelevant when you can have a vehicle that emits exactly zero carbon dioxide or other nasty stuff. Walk around for a little bit and then realize how  electric cars vastly changes the overall atmosphere in the city, for the better. Electric cars are the future and the Model S not only shows that it’s a viable technology, but that conventional cars are already left in the dust. 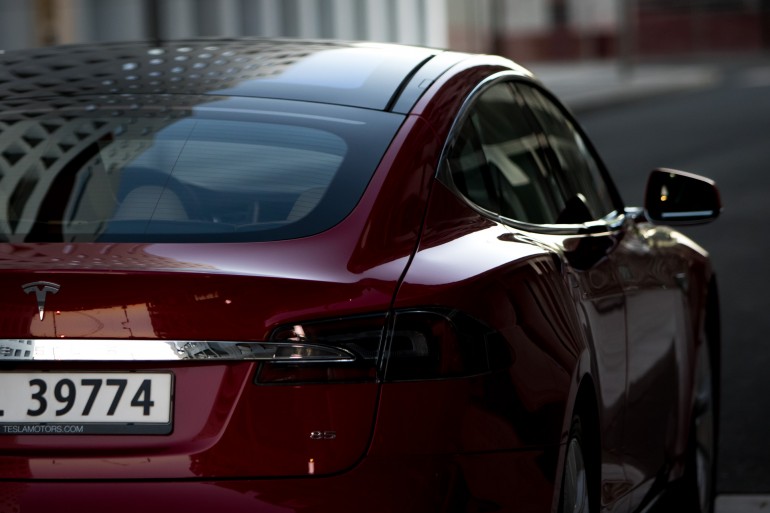 The reason for why they are so popular is simply because electric cars are exempt from VAT and the very high additional fees on heavy, high performance vehicles. A conventional high performance car is often slapped with close to 100% of extra fees where the Model S not only is exempt but there are lots of additional benefits like free public parking, charging and exemption from road and ferry tolls. Gasoline is also extremely expensive. Combine this with a very high average salary and the Model S is not only within reach but the sensible choice for white collar workers.

That’s why the most appropriate place to test a Tesla is in Norway – the land of the electric car.

Inside the cabin is equally spacious. The lack of a drive tunnel or gear box makes the center of the car unobstructed with lots of space for the rear passengers feet and an open feeling the the front. The design is like a high-end boutique hotel; stylish with beautiful lines and nicely finished surfaces. It feels bespoke and quite unlike any other car out there. Not blingy like a Bentley or over-themed like a Lamborghini. Instead it’s contemporary, understated luxury delivered without surfaces or components that feels thrown in, except for one detail.

Impossible not to notice is the 17″ control screen in the middle of the dashboard. Compared to other infotainment system it’s a joy to use and control, but Tesla haven’t magically solved the problem of trying to hit touch letters while reaching forward. Sometimes it also feel a little slow; it doesn’t quite have the fluent feel of a modern iPhone – it’s more like the first gen iPad. Another con is that it’s a pretty big light source shining into your eyes and you need to remember to adjust the brightness before entering a dark tunnel. Of which there are many in Norway. 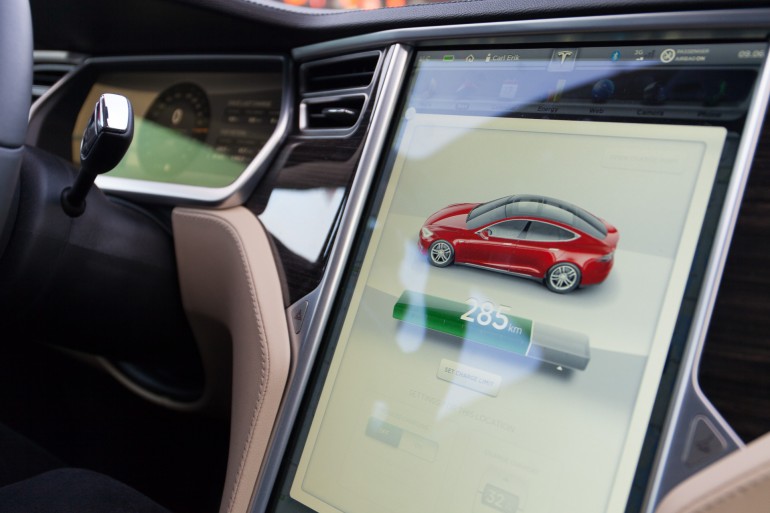 A large display is very handy for planning routes and for co-drivers to work with during driving, but I believe it’s unnecessary. A half-height version would work just as well and not look so out of place – just look at the McLaren 570S. Functionally it’s working very well, a fully logic menu system with appropriate touch areas where you can adjust settings for the car. The only physical buttons are the stalks, of which one is the gear selector, and a few buttons on the steer wheel. This could’ve been a usability issue, but with a bit of mental reprogramming you use the buttons on the steering wheel and learn the voice commands. No more need to use the screen while driving.

The car is built from the ground up as an electric car with hardware and software by Tesla. A clean sheet design where the manufacturer controls hardware and software to be able to design and control the overall experience. Does this sound familiar? It’s Apples recipe for success and it’s a pretty good one if you got the resources to pull it off. It’s hard to describe, but the overall feeling when using the car is that it’s just on another level from the competing cars – except for the fact that if you’re looking for a competing electric car there’s none. It still looks like a contemporary executive sedan, but it’s the sum of all the little details that makes the difference.

Tesla built experience and expertise in battery technology and electric drive train with the Roadster and designed the Model S around a next gen drive train. In the Roadster, the initial plan was to use a two-speed gearbox, but after working with two different suppliers they couldn’t get it to work in a satisfactory way and just decided to increase the power and output of the electric motor instead. Early roadsters had the original X-trac gearbox locked to the second gear, the gearbox worked fine except that the electric motor couldn’t go to zero torque fast enough, while later examples have a fixed reduction gearbox. 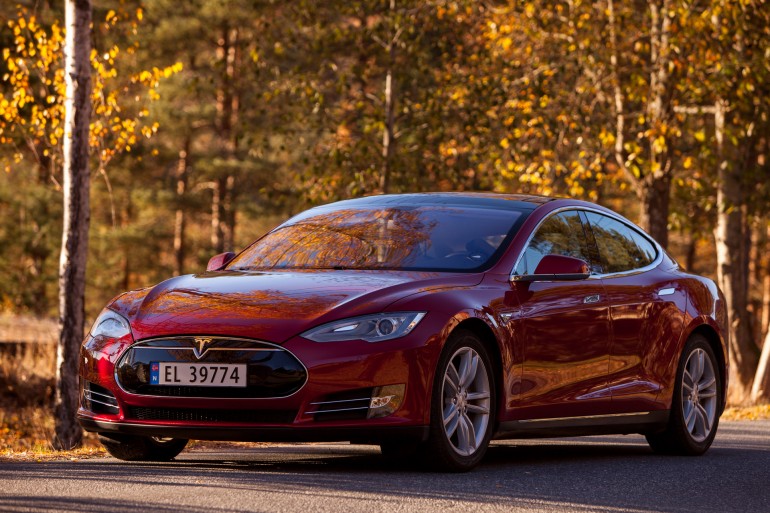 Experiences like this and the results of continuous improvement is evident in the Model S. Rather than waiting for a mid-life refresh or a completely new generation, Tesla pushes both software and hardware changes into production as soon as they’re ready. This is where the companies lack of legacy in the auto production world and the adaption of modern software development methodology really shines through.

When the sensor array for semi-autonomous drive, or auto pilot as Tesla calls it, were ready they started equipping the cars leaving the production line with it. Now, a year later, the software feature is ready and has been pushed out to owners of the cars. Like all other updates, like improved navigation or “the end of range anxiety”-feature it’s pushed over the air through a mobile data connection or Wi-Fi and is a choice to install or schedule an install is presented to the driver. The list of improvements pushed since 2012 is quite impressive. Other examples of this continuous improvement is the titanium battery shield, a self closing charger door, better wipers, and much more. On average, Tesla implements 20 hardware changes per week. 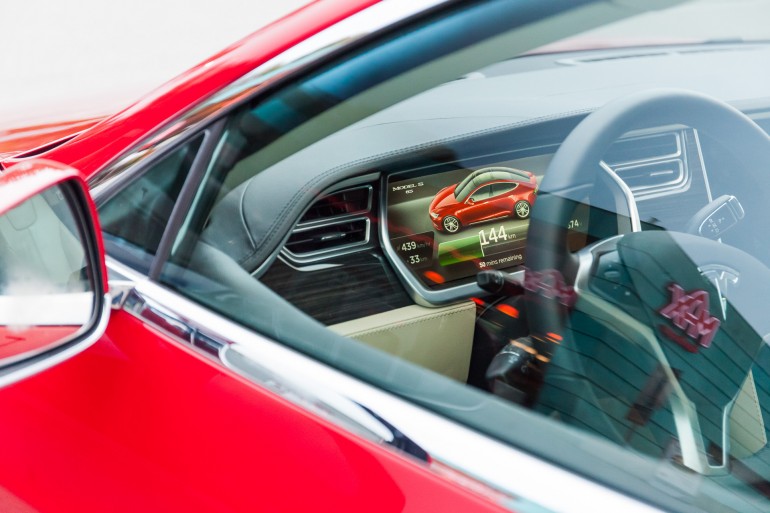 We’re driving a red Model S 85 built in March 2014. It’s basically maxed out in regards to options and equipped with Ultra Hifi, air suspension, sun roof and the premium interior package. The only options not ticked when ordered was the upgrade to a Performance model and the 21″ wheels. A sensible Model S, but there’s nothing standard about it when compared to other cars.

The greatest party trick of all is of course that it’s silent. Not silent for 50 meters like the Prius or Lexus Hybrids but a truly silent until you hit highway speeds. I appreciate a good engine note as much as anybody, but most of the sound from conventional cars is just noise; fans, auxiliaries, wind, tires and so on. Rolling noise is hard to do eliminate but the slippery shape of the car means that there’s no obvious turbulent hot spots. The lack of masking sounds also means that any defects stand out more and the sun roof creaks under some circumstances in this car. It’s nothing major and only intermittently, but it shows that when you raise the bar you really can’t leave no stone unturned.

The second party trick is the amount of torque available from standstill. Put your foot down on the accelerator and feel how you get pushed into the seat. The 85 models 0-60 mph time of 5.4 seconds is properly quick but not supercar beating like the 2.8 seconds of the P85D with Ludicrious mode. Do you need any more than what’s on tap in the 85? Absolutely not, it’s a breeze to overtake traffic and to accelerate up to cruising speed to merge on the freeway. Do I want more speed and power? Of course I do, but this is the sensible choice, remember. 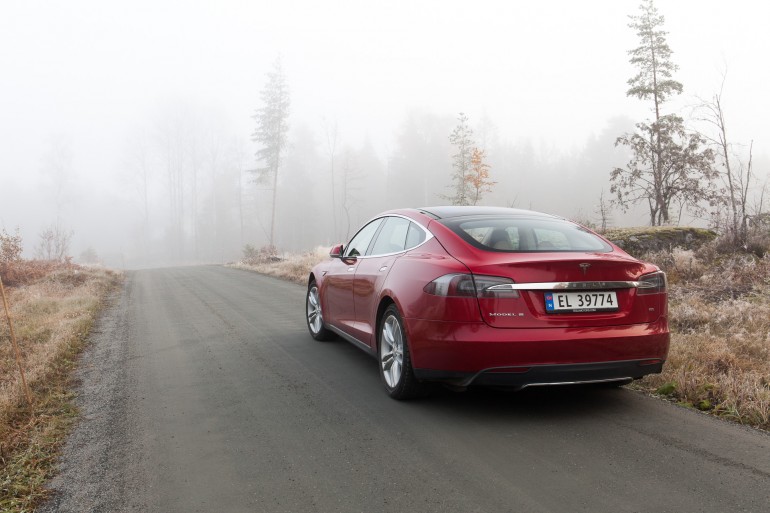 On the road the Model S feels composed, corners flat and feels supple at the same time. The batteries under the floor and lack of point masses high up in the car results in a very low center of gravity. If you really push the car there’s no denying physics, but even under spirited driving on country roads it changes directions with ease and feels more solid than heavy. The vehicle dynamics team has managed to strike a wonderful balance tailored towards confidence inspiring, real life driving.

Many reviews describes the steering as numb, and if you compare it to lighter, unassisted cars or other more modern hydraulically assisted sports cars there’s less feedback coming through the wheel. But those cars are also less refined. When compared to other luxury sedans or contemporary muscle cars I really don’t see anything lacking. It’s wonderfully precise and adjustable for weight, just leave it at the middle setting. 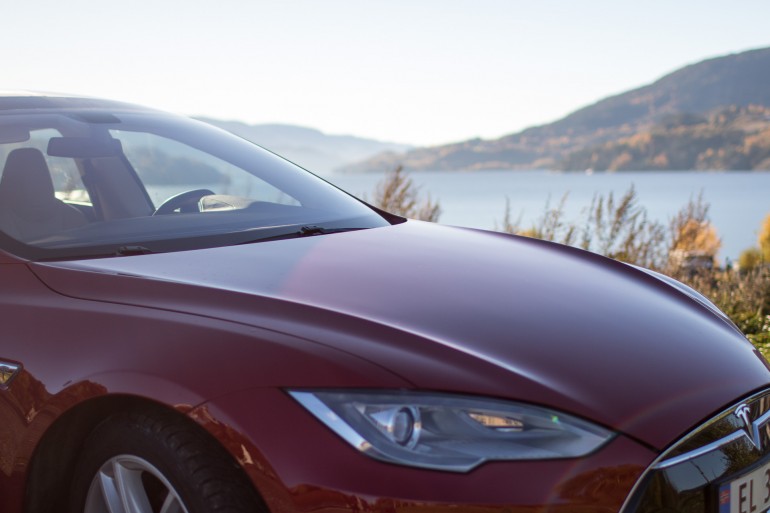 With the Supercharging network getting bigger almost by the day long distance traveling is simply not an issue anymore, not in Norway and much of western Europe anyway. Just a short stop to top up the battery results in many miles of traveling. Most of the Supercharger stations are also positioned by restaurants or other stops which makes it very convenient to take a break while out and driving.

Tesla is a bit unclear about the future of Supercharging. The network itself is one of the biggest advantages and where they have a gigantic head start over the German competition. But recently they have started changing the language over which kind of charging that’s acceptable and has even contacted some customers they feel are misusing the network – even though “free charging on the Supercharger network forever” has been an option many Model S owners  have paid for. While the network won’t go anywhere and will expand even more rapidly in the coming years, how it will actually work is uncertain right now.

The Model S is a game changer and a glimpse into what the future will hold. It’s not only the silent, electric drive and incredible experience of both driving and being in it. It’s the overall approach to car making and the continuous improvements in production and once the car has been delivered. The established auto makers should be worried because they’re already left behind and the question is if they can ever truly catch up.