Mr. Santi Taura is a native of Mallorca who grew up in Lloseta and now works out of the house that used to belong to his grand mother. He lives on the upper floor and the restaurant is at ground level. The restaurant was opened in 2003.

Lloseta itself is in the middle of nowhere on Mallorca, close to Inca, and the only real reason to visit the village is to go to Restaurant Santi Taura other than driving there. The mountain road from Sóller is an incredible drivers road and there’s not many cyclists on it at the end of the day; the view over the valleys and out to the sea when the sun sets is as stunning as it gets.

Santi Taura puts his own style touch to classic Mallorcan cuisine and ingredients. While he isn’t afraid to use imported ingredients or take influence from other cuisines, the food is based on local, seasonal ingredients and traditional cuisine. Only a fixed six-course menu that changes every week is served, either for lunch at 13:30 or dinner at 20:30, which costs €37 plus taxes. The only option to the menu is a cheese-course and of course a wine list with mostly Spanish wines, from €15, and aperitifs at €4. There are no matching wine package but the sommelier is very helpful. 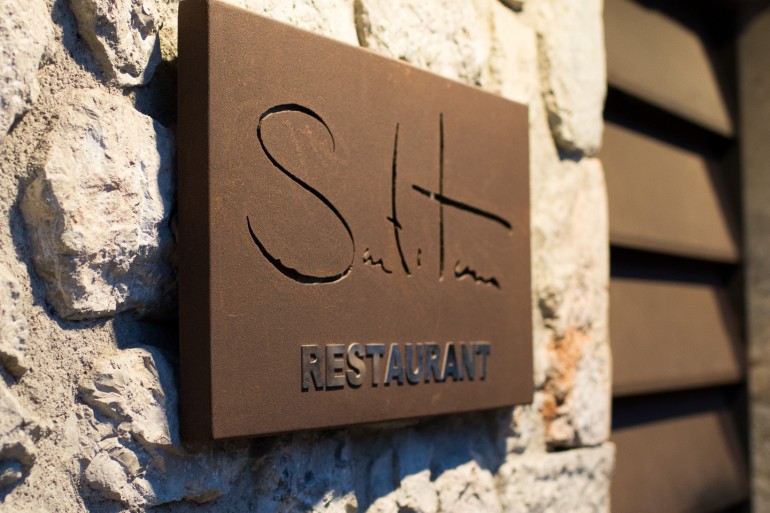 If you show up early for dinner, this is what greets you.

Unlike most other restaurants, the doors are shut until 20:30 so there’s no point in being early. What you have to be early for is to book a table, the restaurant is sold out months in advance during high season. When the doors are opened you’re greeted by the very friendly staff who’ll show you to your table. The restaurant is modern, relaxing and elegant without being formal and dull. There are white table cloths but not before long the 12 tables are bustling and the atmosphere is definitively high-spirited. As soon as you sit down some finger food and bread is served. We got some incredibly tasty and crunchy veal croquettes.

The waiting staff did a quite poor job of selling in their pre-dinner drinks. They have a small selection of four signature aperitifs but it was presented as “Do you want any drinks before the meal? For example red vermouth or gin and tonic?” GT are one of my least favorite drinks so I asked for a Sidecar and was informed that they don’t make cocktails. I asked for the red vermouth and was given a sensational, velvety orange-foam topped concoction. For the next time I think I need to see what they’ve done to the GT as well, to put it like that.

Soon Mr. Taura himself walked around, greeted every guest and presented the menu himself. He’s one of the warmest and most humble persons I’ve ever met and you can really feel his passion for food and the local style of cooking as soon as he starts talking. 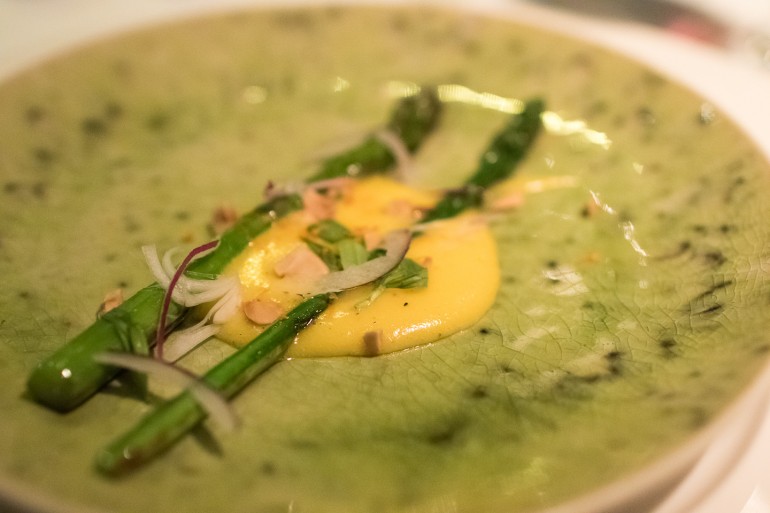 The first starter was asparagus with a Mallorcan hollandaise sauce flavoured with orange, finely sliced red onion and chopped peanuts. This dish was really driven by the absolutely perfectly cooked asparagus – tender but with a little crunch and a charred outside. The onion compliments the hollandaise by providing a just a little sting and the peanuts with textural contrast.

Next up was a pork starter featuring semi-melted Iberico belly from the main land as well as local black pork tenderloin. Joining the protein on the plate was cauliflower, leeks and what I think was a cauliflower purée. For me it was the cauliflower pieces that was the star, the slightly blackened exterior bringing them up from the usual role as a supporting act. As a whole it was a very successful dish that really elevated a simple stew to something more. 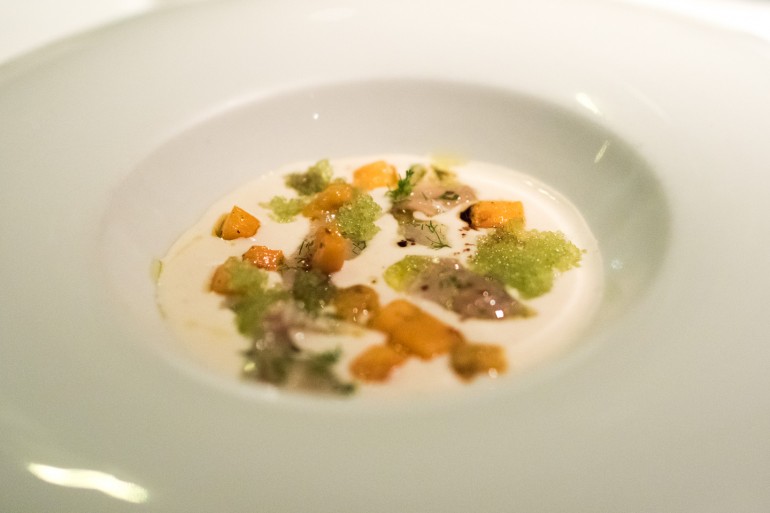 Last starter was some kind of fast-cured fish in a almond cream together with carrot and sea urchin. There was some horseradish in it as well and I immediately got the association to high-end sushi. Next up was the first main course, fish as well, but this time sole in a solid chunk served with grilled miniature tomatoes. The sole was a masterclass in cooking and the smaller bit (compared to normal à la carte portions) suited the lower temperature just perfectly. The tomatoes must have had their acid level spiked in some way and brought the dish up from being on the too harmonious side.

The main meat dish was veal cheeks “cooked for many, many hours” served with red curry, peas and artichoke. There was also some kind of lighter sauce and what I think was fried pork rinds. In it’s simplicity it was another one of those dishes that had incredible depth and gentle balance where the curry and rinds spiced it up and kept it from being all mushy.

Finishing it off was an incredibly refreshing dessert. It was almost as a palate cleanser, but in the form of a much more complex dessert. After eating the meal we didn’t feel in near as full as you’d think after eating six proper dishes, bread and a fried amuse-bouche. The dessert was based around a sorbet made from the Mallorcan version of Gin with yuzu sponge cake and aerated, crystallized sugar. I’ve never had a dessert that was so light and still had so many layers, a truly appropriate way to finish it off and showing just the same style as the rest of the dishes. 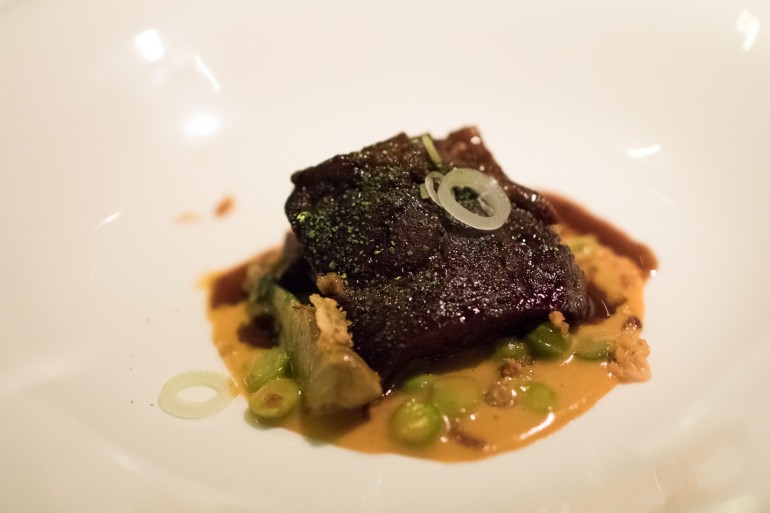 The closest to Santi Tauras food that I’ve previously experienced is probably by Marc Forgione – whom I’d love to see battle it out in the Kitchen Stadium. It’s beautiful and delicate but not overly stylized; Santi Taura describes some of the other top chef’s on the island as cooking for tourists and what I think he means is that his food is for food lovers while some of the Michelin star restaurants cooks more for showing off and for you to impress your company. His food impresses from the inside and the plating shows the same kind of delibarate carelessness that makes the Italians look casual while dressing up and elegant while dressing down. This is casual food without cylinders, dots or lines but still extremely elegant. Maybe we should call the style sprezzatura cuisine?

He let’s the ingredients speak for themselves and knows just how to balance it out so that it becomes easily accessible but with lots of depth, textures and incredible flavor. The food is never strange and you don’t have to guess what the idea was behind a plate, it’s pure enjoyment and harmony. It lacks some disharmonious or surprising elements to provide the tension and excitement I’ve felt at some other places, though. 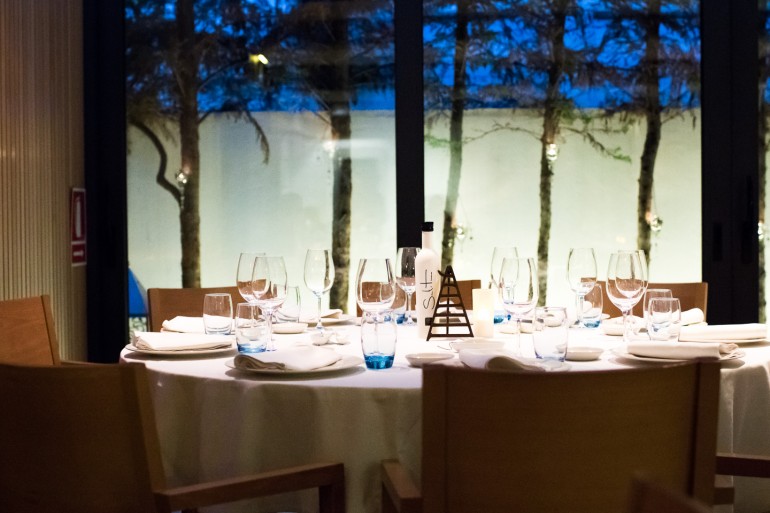 Cooked to perfection takes on a new meaning, from the delicate sole, the crunchy asparagus to the tender veal cheeks. The technique is never front and center and that makes the dishes quite different from the food at Sage or Dinner that otherwise shows the same attention to detail in the actual cooking and preparation and similar pleasant flavor profiles. The food at Santi Taura is of the same level but more laid back and comfy.

My meal at Restaurant Santi Taura was one of the most enjoyable I’ve ever had and anyone who visits Mallorca must set aside one evening to dine there. As an added bonus it could very well be the best value food I’ve ever encountered.

The Sidecar and Variations